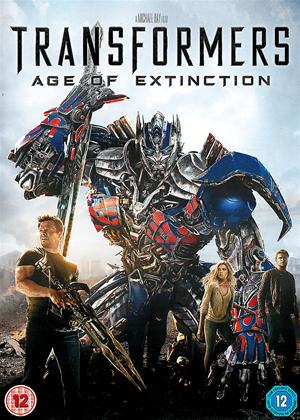 Reviews (4) of Transformers: Age of Extinction

If you like the Transformers movies in general you will like this one, it's basically more of the same.

On the positive side it's very well produced, the picture and sound quality are excellent, plus it's the first movie available with a Dolby Atmos sound track. Mark Wahlberg gives the film a lift in quality as well.

However on the down side, the story is lacking and despite all the action I found it remarkably boring. Added to that it's almost 3 hours long!

So in conclusion if you like the idea of three hours of silly robot fighting based around a shakey story, and have a really good surround sound system give it a look.

I enjoyed this 4th film of the series, Loads of robot fighting action, special effects very good. I found the acting better quality than the last film , Mark was very good in it. I found it better then the 3rd film.

If you enjoyed the first three transformers, you will love this one. I like Mark Whalberg's character better than Shia labeouf's (I'm a huge Mark Whalberg fan anyway). The story was good and the action scenes where incredible. Had a smile on my face from start to finish.

Lets be honest, the original Transformers trilogy was a pile of tripey rubbish for the most part. Not only were most of the lines in it screamed but half the scripts were people calling out other peoples names. Not only that but not one had a coherent plot to stand behind. The closest to a decent film was the original and even that sucked the life out of most viewers. That’s what makes it so surprising that Age of Extinction avoids the usual problems and actually turns out to be one hell of a fun ride.

The film follows Cade (Mark Wahlberg) and his daughter Tessa (Nicola Peltz) as they are drawn into a war between humans and Transformers as a covert group is hunting down Decepticons and Autobots alike merely for the sake of scrap to make their own. However when an alien bounty hunter emerges to hunt down Optimus Prime, Cade must protect him so that he can save his family from the dangerous threat that now hunts them.

Not only does Age of Extinction feel less messy, it isn’t as loud, it has real moments of catharsis and comedy and Wahlberg makes for a much better lead than Shia LaBeouf as he presents the viewer with actual character instead of the kind of forced kind the paycheck hunting latter displayed. Sure there are some dud characters, mainly Tessa’s love interest Shane (Jack Reynor), a character who is supposed to be Irish but really sounds Australian, but the film sidelines most of the weak story threads in favour of a family orientated thriller that never lets up.

Sure the film has a rather leen amount of story, in fact about 40 minutes of the films 165 minute run time is devoted to it, but it never really feels like a detriment to the film as the action flows seamlessly into these moments. The key change however is the action isn’t lazy, the shots look good and what happens on screen is clear and precise unlike the confusing final act of Dark of the Moon. This is entertaining Sci-Fi that will hopefully make you forget about what came before as we head into a new trilogy with fresh eyes and hope for something better.