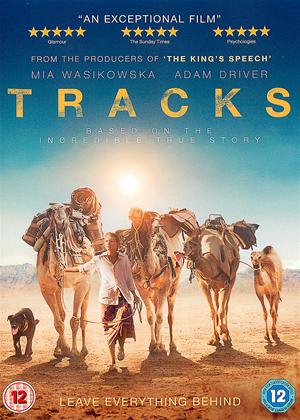 Honestly. No hat, sandals, fair skin and half naked in a hot desert climate? Under normal condition, with solid footwear, proper clothing and a hat, one needs about 1 litre water per hour… But the worst is the nearly constant droning “music” – terrible.

who was this girl? why did she feel the need for this crazy undertaking? I wanted more background. I also wanted some everyday practical detail about eg. how/what she cooked and ate , how/where she slept, how on earth she managed to unload and load all that baggage every day singlehanded.... it could have been such a good film, but (for me) it wasn't.

Enjoyable film, some nice photography. Mia 'Polishperson' was good throughout, made me want to know more about the true story, almost, but not quite, wanted to read the book. Worth a watch.

I crossed the Gibson desert on a 95cc Lamberetta scooter. I travelled with my wife and 4 children around Australia, leaving the map looking like a spiders web. One trip across the Barkley Tablelands before they even put a road in. All maps had instructions to not venture beyond Mount Isa, without reporting to the police, and getting their consent. We had no access to any big money backers, satellite and even mobile phones had never been even dreamt of. It was unlikely we would meet anyone before getting to Barry's Cave. And if our transport broke down, A 1938 Daimler with a Gardner 150 engine. It had been a Eastern Goldfields coach which my wife and myself we converted into a mobile home. We sat it out near the Isa Mine, and waited for the dark, after which we drove for miles without lights, so that the cops wouldn't see us, they would most likely have stopped us, we couldn't afford to travel back and make our way to Tennant Creek somewhere safer. The Tablelands in 1970/71 were really dangerous, the bull dust in places was like driving through as sea of sand, smooth areas often turned out to be deep holes. Even all these years after I have nightmares thinking about how dangerous it was. The stock men that were sitting around outside the roadhouse at Barry's Caves, said they had seen our dust for a long time, but got the shock of their lives when we pulled in, they couldn't believe we had travelled across from Mount Isa, and were even more surprised that we had started that journey from Port Hedland, through Perth, Port Augusta, Adelaide, Nowra, Sydney, Brisbane, Townsville, Charters Towers, and Isa, and we were heading for Tennant Creek, and on to Darwin. If our transport broke down, it would have been the end for all of us all. No millionaire backers keeping tabs on us, even on other trips between jobs, across from Laverton , where I worked with 5 others digging assay samples of nickel, which turned out to be known as Poseidon, and then Mount Windarra. Leaving there I travelled to Parraburdoo through Leanora and Mount Magnet and up the Meekathera Road. We travelled so many times up, down and across, even to the lowest corners of the south west of WA, and the south east of Victoria (Club Terrace, Cabbage Tree Creek). In every city or town, people would stand, and look at the map in disbelief the kids had made on both sides of the bus, they used a Gold Fleece Map cut out, and with a sponge, dipped in white paint marked out the coast-line, it looked like surf. They then painted the routes we had travelled on, colour coding for the number of trips on same route. And we were most likely the only people travelling, that always found water where we could have a shower, using an length of hose pipe and a watering can head, and stock up our water supply, even at times travelling 10 -15 miles off our route, following the animal tracks, and the arrows they made at junctions of different tracks, if the arrow is facing you, you are going the wrong way. At the junction of your track you will see a track that is used by more animals, Cattle, Sheep and Brumbies. Every one of our journeys were an achievement, we never had help from anyone. But this film was absolutely the most boring nonsense I've ever seen. Of instance she backtracks exactly, and finds a lost compass, but the can't retrace her steps. A lot of our friends were and are aboriginal, they have a very hard life but even in the 1970s, they were not as primitive has they were depicted in this film, in fact I worked with lots on the primary construction of places such as Dampier Salt; Dampier Township; Intercourse Island, and the causeway, and many more. And I know lots of sheep stations that could not survive without them during shearing. Especially the blokes from Yalata, they often stay in our house in Kingoonya, when they were working at Glendambo. Nothing is an achievement when it is funded by a multi-million dollar company. My wife, was much braver than anyone could image.

really enjoyed this film. I hadn't realised about wild camels. not read the book, but after watching film think I should.

I loved this movie not only for it's simplicity but also for the dogged determination that the Heroine showed for her quest. It's well shot and well made with some poignant moments. Overall I would say it's definitely worth watching.

I’ll be the first one to say I hadn’t heard of Robyn Davidson before the release of Tracks, I hadn’t even contemplated the fact there were people who were crazy enough to do something so daring and adventurous. Maybe crazy is the wrong word for Robyn but it’s easy to see why Tracks works as a film as not only is she an enviably courageous woman but her sense of modesty makes her instantly empathetic. Her journey is joyous and miserable in equal measure and a treat for any fan of contemplative, introverted cinema.

Tracks follows Robyn (Mia Wasikowska) as she prepares for her 1500 mile trek across Australia from Alice Springs to the Indian Ocean. As she gets ready she must face her fears while also combating her idealised view of isolation as she faces real loneliness as she must rely upon her own abilities to make the trek. Along the way she finds herself joined periodically by a lively photographer (Adam Driver) intent on telling her story and showing the true horrors and wonders of the desert from the perspective of someone brave enough to travel it.

Unlike The Way this isn’t a trip brought on by grief, it isn’t a way to connect to people despite having a lack of social skills, its about connecting with a world we have all lost in some way by living in a civilised society. The idea that one can find peace and kind hearted people in the most inhospitable places is the whole message of Tracks and its one that is handled with the upmost care and delicacy. There is no denying that life is life and it is going to throw some terrible things your way, as Robyn finds out but it is also a mixed bag and the film ensures that you can see the light at the end of the tunnel even if the road ahead is long and arduous.

However the film would only work if it had a powerhouse performance and Wasikowska delivers in spades. Not only is her Robyn kind yet abrasive but she is also a strong willed and naive girl who hasn’t quite become her true self. The insecurities and inexperience never overcome her but Wasikowska makes sure you notice them making Robyn that much more likable.

It seems like lately films have started coming out of the woodwork where characters find themselves on long walks looking for answers, much like with The Way Robyn finds them but with Tracks you might just find some yourself.