Rent The Poltergeist of Borley Forest (2013) 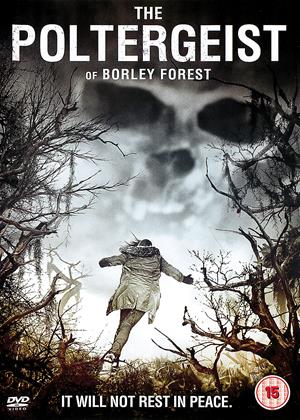 Rent other films like The Poltergeist of Borley Forest

Reviews (1) of The Poltergeist of Borley Forest

Spoilers follow ... - The Poltergeist of Borley Forest review by NP

Talented artist, college student and waitress Paige (Marina Petrano) is sitting at the edge of a forest alone, while her friends party nearby. Unhappy, she wanders off. Finding a singular piece of rope hanging from the branches of a creepy willow tree, she brushes her hand against it, and recoils at the sensation.

Although clearly made with a miniscule budget, these opening scenes are moderately sinister, but not as (possibly unintentionally) frightening as Paige’s parents, who we meet in the next scene. Her Dad is a slab of clichés concerning studying and ‘the future’, and her mother adopts a sardonic, belittling tone ALL THE TIME. It’s a wonder that Paige and her friends - including love interest Cooper (Nicholas Barrera) and brother Tommy (Christopher Ingle) - are as grounded as they are (at times it seems as if Cooper could be the ghost featured in the title). Paige certainly doesn’t deserve to be terrorised by whatever spirit she brushed against in the woods.

This is not compelling. The slow pacing during the first half requires you to summon up interest in Paige’s day-to-day life, which isn’t made too difficult because she’s likeable. Her visitations are few and far between and consist mainly of shadows moving behind her that she doesn’t see. Things aren’t so dull that I was tempted to switch off or meander, because there’s some nice dialogue, some performances that succeed despite the inexperience of the actors, and the definite feeling I wanted to find out where it was all heading.

At over 100 minutes, this is simply too long. Twenty of those minutes could have been pruned, which would have improved things a lot. Some scenes simply meander without adding anything. Some of the characters’ dialogue is hard to make out, especially in the lengthy scenes explaining (to some extent) the mystery of Borley Woods, which is unfortunate. In contrast to tis, there’s a nice twist at the end, which is perfectly executed.

As someone who wouldn’t have the first idea how to make a film, I commend Stephen McKendree on his work. As a viewer, I would say that with more polish and refinement, this would have been much more consistent in its enjoyment.