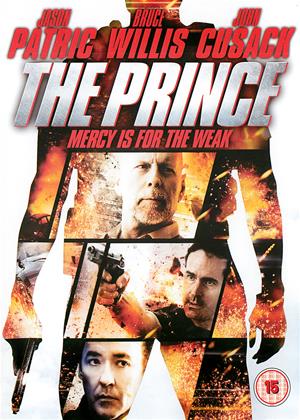 Reviews of The Prince

The Prince is a 2014 film that is probably best described as an action film that attempted to become The Expendables (Jr. Edition). It boasts ‘big’-name stars like Bruce Willis, John Cusack, and 50 Cent, but they were no where near enough to salvage this film.

The film is like many which we have seen before (the most recent example being the Taken franchise), and follows Sam (Jason Patric). Unbeknownst to Sam, his daughter (played by Gia Mantegna) has dropped out of college, and it isn’t until he gets through to someone else on her phone, that he goes looking for her. He is horrified to discover that his daughter is working for a known drug pusher, but when he is attacked by some bad men and fights back with surprising skill, it appears more than one secret has been kept. With an even bigger bad guy named Omar (Bruce Willis) also on his tail, the future looks more than turbulent and unknown.

Upon watching the trailer, it looked alright and seemed to have potential.

The cast boasted some well-known names - Jason Patric (The Lost Boys), Bruce Willis (Die Hard), and John Cusack (2012) - and these actors have proven that they know what they are doing. The bad part is that while these known actors are listed, they do not all appear for very long. Cusack, for example, is only featured for approximately five minutes, and rapper 50 Cent for approximately five seconds. It is odd that these actors would take roles so minimal, and the rest of the film majorly let them down.

One of the main requirements of an action film is that it needs to include fight scenes, shoot-outs, and/or car chases. Yes, The Prince did have these, but they seemed very by-the-books, and not engaging and entertaining at all.

Another way that the film appeared very rudimentary, was the story in general. It was not original in the slightest - something which is always demanded by audiences, but more so of late - with cliche characters (i.e. the supermodel-looking girls who are always conveniently around) and it all contributed to making it dull. The only positive thing was that the film moved quickly, so you didn’t feel like you were suffering for long.

I am not the only one who didn’t like this film. Online and in-print reviews have resulted in a swarm of massively negative reviews. You can also see how the distributors felt about the finished product when they basically made it go straight to DVD.

I know I have been harsh, but this is just my review. Everyone has a different opinion, and I’m sure there are people that will like this film. It does contain violence, drug-use and course language, so make sure everyone is the appropriate age to watch this. With any luck, this won’t be career-ending for these actors, because I would love to see them again.