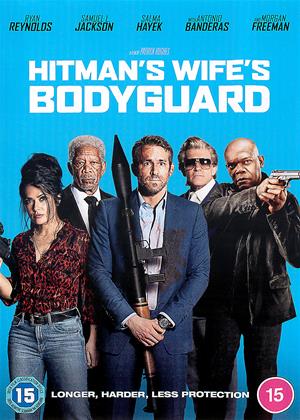 The sequel to 2017’s surprise buddy action flick of The Hitman’s Bodyguard feels as though it has a lot of frenetic expectations to live up to as an action sequel. The first film managed to crank the likes of Samuel L. Jackson and Ryan Reynolds to their full potential of insult and snark, with Jackson laying down profanity bombs and Reynolds bitterly remarking along the way in their violent adventure. The continuation of their antics thankfully doesn’t feel as though the film is trying too hard to find a reason for them to hook up again, despite still being a bit of a mess. The sequel finds just enough funny and exciting stuff for them to do in another globetrotting exercise in gunfights, car chases, and explosions.

The plot is not as compelling as the previous film. Antonio Banderas plays a loudly-dressed political player of Greece who has the whole Bond villain shebang: mansion, guards, yachts, and a sinister plan for global domination. Aiming to get his revenge on the sanctions of the EU, he plans to swipe a drill and hack into the EU’s elaborate power grid to hold the union at his mercy. Standard evil villain scheme and Banderas pretty much gave the blank template little flair with a passive performance.

Even the framing of getting Reynolds and Jackson back together is mildly forced. Reynolds’s character of Michael Bryce is trying to recover from being a failing bodyguard with his license to do so being under review. He decides to take time off away from the darker aspects of his life involving killing and guns. That sabbatical will have to be put on hold, however, when Sonia Kincaid (Salma Hayek) comes asking for help while she’s under fire from other hitmen. Sonia, as you may recall, was the wife of the dangerous hitman Darius Kincaid (Samuel L. Jackson). The couple is now on their honeymoon and finds themselves thrown into a new situation when a misunderstanding leads to all three of them being kidnapped and forced into this James Bond plot.

The rest of the film has some relation to the nature of family and individuality but it’s mostly just staging for more slapstick action. Reynolds and Jackson once more spend their time bickering, although Hayek certain wins for being the loudest voice in the room. Her character is somewhat understandable given that she’s bubbling with the most rage for a lacking honeymoon and trying to deal with the annoyances that are the feuding nature of Michael and Darius. One can really sense how much improv must have been placed on the actors when engaging in a script that finds them trying to yell, scream, and laugh over each other.

I’d be miffed by this sloppy method of seeking comedy amid zinging bullets if there weren’t a few decent laughs. There’s some fun to be had in how chaotic the action becomes, where cars and boats seem to explode almost inexplicably. The backstory of Michael’s later mother as well as the reveal of his father with a surprise cameo is both absurd and somewhat emotionally resonating. The running bits of Michael trying not to kill and his insistence on seat belts do have their moments. Darius and Sonia’s relationship have a mildly amusing boil for them seeking to start a family and I wish more of this subplot forced itself into the central conflict, considering how by-the-numbers the whole drilling operation appears.

I’d be lying if I said I didn’t laugh here and there but this sequel really does struggle to find the more genuine laughs amid its chaos. There’s also a weirdly mean-spirited nature that fluctuates throughout the film to the point where Bryce is practically pitiful with how much he gets tossed around, both in terms of power and physically as he once more launches himself through a windshield and turns out just fine. But every now and then this muck of a picture manages to please with frantic editing and explosive energy.