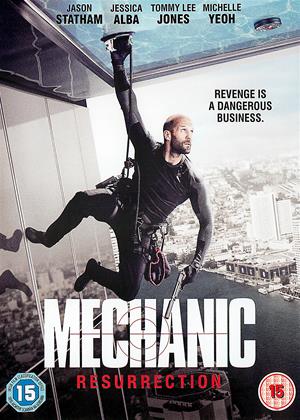 Has not got the added bonus of any personality, as in transporter. Normal bish bash bosh, and very thin story line connecting the action segments. Big fans of Jason will watch it, and good to see he is keeping fit.

Yet another baldy drawn out remake! - Mechanic: Resurrection review by CS

What on earth was the point of this film, because if there ever was one, then it seems to have been lost in the plot, not that there's much of that either! Every moment possible, Jason takes his top off to show how buff he is, but perhaps also to distract from his very mediocre acting. In fact the only person in this film who delivers anything is Tommy Lee Jones, who delivers his usual dry as a bone dead pan character! This tries so hard to be a slick stylish action thriller, but in the end simply becomes two hours of dull predictable smash and grab!

Taciturn action-man Jason Statham zaps around the Pacific from one exotic location to another annihilating bad guys in one set-piece after another. The film’s signature scene (it’s on the DVD cover) sees him climb the outside of a Sydney skyscraper and swing out over the abyss beneath a cantilevered swimming pool. If you’re a Stath fan, what’s not to like? He even gets a romantic subplot with Jessica Alba, testing his acting powers to the limit.

The fisticuffs get a bit tiresome, especially as Statham is overly invincible, so It never reaches the thrill level of the Mission Impossible franchise it most closely resembles. But it’s still fun ride with some great stunts and scenery. Dennis Gansel directs smoothly with lots of attractive aerial shots of far-flung holiday destinations, legendary action director Vic Armstrong (Bond, Indiana Jones etc.) shoots the stunts and Mark Isham contributes an insistent score. The DVD extras are also worth watching for Isham’s master class in the vocabulary of film music.

The plot line for this film is rather poor as our man is forced to knock-off some unsavory characters but really is dreaming of retiring on the beach sipping beer. Then there is Tommy Lee Jones who seems to have decided rather than portraying a nasty gun lord would rather join U2 as a Bono look alike. The problem is the film takes 40mins to get going and the action never really peeks, the good parts, but these do not help in overlooking the bad.

Didn't have it but didn't much like it either. Jason cannot act for toffee but he is very good at taking his top off at the drop of a hat!

Action scenes made us laugh!

Not really worth the watch.

Mechanic: Resurrection asserts a certain point in regards to films, albeit a moot one while we’re at it - that a sequel of a remake will almost always fail to provide the same thrill as the original installment did way back. Exceptions of this rule exist only to sorely confirm said rule over and over again in the brazenly sequel-churning industry that is Hollywood.

This time, instead of Simon West, director Dennis Gansel takes over and teams up with action star Jason Statham to bring you the most generic action flick of recent memory. Statham plays Arthur Bishop with a raspy voice that neither respects an American, nor an English accent. Antagonist Crain (played by Sam Hazeldine) copies Statham accent into what sounds as a symphony of cliché and hoarse voices as if dubbed by some guys who do English anime voice overs for a living.

Remember how ‘The Mechanic’ had an actual story to drive the protagonist forward to accomplish his goal? Yeah, that’s all omitted here, and instead what the audience gets is convoluted mess and a typical in-your-face chaotic action that is only partially relevant to the plot, if there’s one to begin with.

For example, when one thinks of the Charles Bronson mechanic of old, what immediately pops up is a cold-hearted hitman that will stop at nothing to achieve what he thinks is right, even if that means killing off some dudes along the merry way of doing so. Statham’s motives are nowhere near of such paradigm, since he becomes a mere vessel to propel the story forward to yet another scene of redundant action.

The mechanic’s change of tactics is as ironic as it can get: a somewhat well-choreographed opening fight scene is later replaced with surgical-like precision that just doesn’t suit what was previously established. Then chaos again. Then the calm after a storm. Mechanic: Resurrection at this point becomes an accidental action-comedy piece that both bores and entertains.

Or, even more precisely: the flick becomes a product for which you have to pay money in order to get it. Plain and simple.

Now the acting. Boy was Alba out of place in this one. Her flamboyant showing off was nowhere near as good as, say, her work in Sin City. Michelle Yeoh as Mei was underused and Tommy Lee Jones did absolutely nothing relevant to the plot, or the movie for that matter.

To conclude: if you crave for an over-the-top, accidental spoofy action comedy film, then with Mechanic: Resurrection you’re in for a treat.