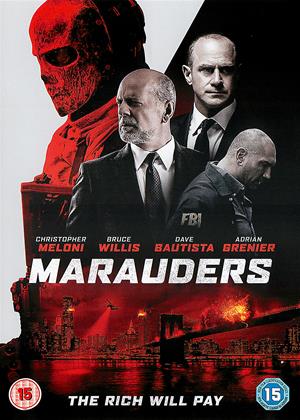 Chris Meloni left the SVU TV series to make this load of tripe? He plays a sweary version of his SVU detective who is investigating bank robberies. The dialogue he has to work with is embarrassing. Colleague: ‘F*** that.’ Chris: ‘F*** you, f*** that.’ The plot is a complete cliché. The action, shot with hand-held camera, is muddled. Bruce Willis gets star billing but only phones in a bit part as an evil business chief.

Is this the best screenplay they could come up with? It’s so bad it will give you an occasional laugh, which accounts for its one star rating. Chief culprit? Hopeless B-movie director Steven C. Miller.

A conspiracy thriller neither mysterious, nor interesting: Marauders is that final dip in Bruce Willis’ career from which there is no turning back anymore. The heist, criminals-turned-saviors and other clichéd principles are all alive and well within this disarrayed set of visuals and sounds, but they are executed with a near C-level grade mastering that, if it wasn’t sad – it would probably end up funny. That said: Marauders is still passable as a film – not for Willis’ antics, but for the great performance given by none other than Christopher Meloni playing the vicarious, endearing FBI agent Montgomery.

Marauders starts well forward into the story, giving viewers time to ponder what took place beforehand. After barging into a small-time crook’s home, the police stumble upon large quantities of money, weapons and other stash criminals often hide. From here onward, it becomes clear that even the police cannot be trusted, as the first thing they do is take whatever loot they can for themselves, no questions asked.

Afterwards, Christopher Meloni’s characters Montgomery leads his FBI team through the door – only to find an empty apartment clear of all previously existing evidence. He rushes to confront the other squad, but they seem as distant as ever and refuse to share their findings. Montgomery is not a fool however, and grows another pair of eyes at his back in order to remove himself from harm’s way.

To a greater amount, the story heavily borrows from similar heist-gone-wrong films like Heat, Inside Man and Ocean’s #X. And what’s more important, it borrows the lesser bits which threw specks upon those films and made them imperfect in every sense of the word. Despite having action giants on board like Dave Bautista, Christopher Meloni and the veteran himself Bruce Willis – Marauders turns little of their talents into its own advantage, and lets the good moments slip by into an otherwise convoluted mess of a plot.

The plot is probably the screenwriter’s exercise in employing the three part structure (exposition, culmination and end), and as such, it falls flat. First, there’s a heist. Then, a second one occurs. Finally, a third heist only adds insult to injury since at this point, it becomes clear the producers want to save money by copying and pasting the same idea they had in the first place – threefold.

All is not grim however: its political undertones hit home and perfectly uncover humanity’s current global political predicament as of the beginning of 2017. Other bright spots include Meloni’s involvement in the project, Johnathon Schaech’s subtle performance as Detective Mims, and a twist which I wouldn’t dare to expose (as if it will make any difference whatsoever).

To conclude, Marauders is not the best, but not the worse either. Its footing can be found somewhere in-between, most notably the place that pays large amounts of money for mediocre features such as this one.