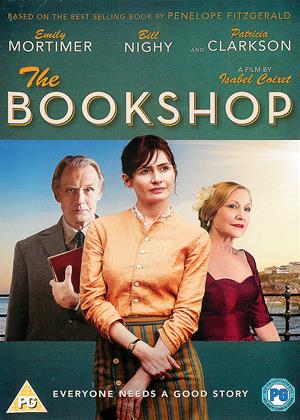 Reviews (12) of The Bookshop

Waste of time - The Bookshop review by MH

A strong contender for the worst film I have ever seen. The direction was appalling, the cameraman was obsessed with trees doing nothing, the editor allowed the pointless footage to be shown, Patricia Clarkson was expressionless (although you did get the impression she wondered what on earth she was doing there) and Emily Mortimer gurned instead of acting.

The only redeeming feature was Bill Nighy's untypically restrained performance which was genuinely endearing.

And I paid for a cinema ticket. I should have asked for my money back, like they do in the US.

brilliant - The Bookshop review by OP

My husband and I loved this film. The cinematography is wonderful, there are absolutely beautiful and mesmerising shots. The pace is gentle and delightful, and the acting is absolutely superb. I don't know what he other reviewers were expecting - but this film fulfilled all of my expectations and indeed, exceeded them. While it is not exactly a sad, because the characters are so strong and defy you to feel sorry for them, it has a powerful message. If you like quirky films with great characters/actors and wonderful shots - you will love this film.

Slow but moving at the end - The Bookshop review by SM

The first half of the film I did find slow but I became more and more involved with the characters. Bill Nighy gives one of his best performances without his usual mannerisms. The plot develops more in the second half and it was enjoyable to watch a film about characters rather than car chases.

Not for everyone but for those who enjoy a traditional story-telling, it is a find.

Slow but gentle and relaxing. - The Bookshop review by bijou

Rather slow but well acted . Change to watch a film with no sex or swearing. Shows how difficult it is for the ordinary person to go against the powers that be.

A gem - The Bookshop review by JD

My Wife and I loved this movie .

Pity about the negative reviews, obviously given by people who do not appreciate a beautifully acted story without lots of swearing, violence and special effects !

The good news is that people who DO appreciate a gem of a movie can now see for themselves, on dvd, just how GOOD the Bookshop is.

I thought the story was mush deeper than I had been led to believe , due to the wonderful acting and script. Special mention must go to Bill Nighy who gives a career best performance as does Emily Mortimer, in a subtle but strong lady, recently widowed but determined to succeed with her dream of opening a bookshop despite local resistance from some of the towns bigoted residents .

Special mention for the young girl who helps out in the bookshop in the afternoons, a lovely, assured performance.

If you enjoy a good movie please give the Bookshop a viewing.

Showed up Society has not Chaged - The Bookshop review by KW

Interesting film that showed up society as it was where the powerful deperate for their gong will go out of their way to ruin the lives of anyone who gets in there way. Patricia Clarkson's character was the classic example of those who have gone before and after to get there way no matter how many lives they ruin. My major gripe was that apart from the main characters, the rest were so feeble that the actors had nothing to get their teeth into and were just going through the motions. A film with better direction and script could have been so much better!

Actually folk acting. No swearing or violence. Has to be at least a 3 for not being chainsaw 28. No poor actors, and some well executed support cameos.

Have to say it must be a very wealthy 1959 village, where every car must be brand new! In 1959 there were very few cars, and most were black. Although my brother did have an Austin Ruby for £5 that was hand painted white and blue.............

Agree with Waste of Time review above, tediously slow, appalling acting, set in Northern Ireland when it should have been Suffolk. The occasional nice view, ridiculous costumes, unbearably whimsical...

Riveting - The Bookshop review by KG

We enjoyed this even more than Penelope Fitzgerald's novel. Riveting playing by Bill Nighy who is never afraid of being still and by Emily Mortimer. Enhanced by the calm, unhurried tempo, free from irrelevant distractions such as intrusive music. And free from the trendy sensationalism so prevalent in current American/English cinema.

A good cast were let down by a plodding script and a director who missed the chance to change the pace. I'm not sure if the editor was sticking to the brief but this old fashioned story of small town politics needed cuts. Unless you are an extra in this film, I'd give it a miss.

Bookshop is the kind of calm and cozy drama that always feels to find that right balance of strife and warmth to be somewhat soothing. There’s contention within its premise for a struggling bookstore of the 1950s. There’s charm with how the owner hires a plucky young girl to help her. There’s sweetness within a kindship that the owner forms with a societal shut-in. And through it all, books are what bring it all together, making this mildly quirky picture worthy of a watch.

Emily Mortimer plays Florence Green, a recent widow who had decided to open up a bookshop in the coast town of Hardborough. She buys up an old house and sets to work transforming it into her own business. It’s not going to be easy though. The town isn’t much for books. She speaks with a boatman who relays her this information and admits that he’s not much for reading. Even when Florence can find some people who like reading, she can’t attract the right crowd. A stuffy intellectual boasts about how much he loves poetry and when Florence doesn’t get his reference, he quietly shuffles away.

It’s a tough town especially when some of the residents are hoping to have Florence evicted. Violet Gamart (Patricia Clarkson) wants to see her go most of all as she has a desire to turn the old house into an arts center. Still, her shop makes progress. She soon attracts the attention of Christine (Honor Kneafsey), a girl so determined to work despite her age and that she doesn’t much care for reading. She also makes friends with isolated recluse Edmund Brundish (Bill Nighy). Though Edmund begins the film hating books by ripping them up and burning the contents, he soon warms up to them in a different way with Florence’s shop. It isn’t long before he’s obsessed with Ray Bradbury and can’t wait for another book. Edmund and Florence soon meet at his big and empty estate and their exchange is pretty adorable.

Bookshop has a few moments of rebelliousness and passionate rage for being down on your luck. Florence, Christine and Edmund become such unjustly scorned social misfits of the town that when a tragedy befalls one of them there’s a bitter shove for the world being so cold. The cast really works well here, where Mortimer is a darling in the face of an uphill struggle while Nighy has his gentle charms. Even Kneafsey deserves some credit for giving some stern curiosity to her role. The only role that becomes distracting is Patricia Clarkson putting on the appearance of an English woman in a manner that reminds me more of those old Hollywood films where white American actors would try to play any international role.

Bookshop never fully comes out of its shell with its drama and there’s something both frustrating and appealing about this aspect. There’s a calmness to a picture where one woman struggles against a town that wants to kick her out and are prepared to do so with a government bill. Perhaps it’s just the environment. The coastal town seems so cozy in its dreary wonderment that it’s the perfect weather to snuggle up indoors with a good book. Mildly amusing gags of old men picking up books on women’s fitness and Nighy confused by being a copy of Fahrenheit 451 make for the easiest of smiles in a picture that never feels in a rush to get anywhere all that fast. There’s just something so oddly pleasing about a picture like that seems to settle itself within its own fascination of books and outsiders.