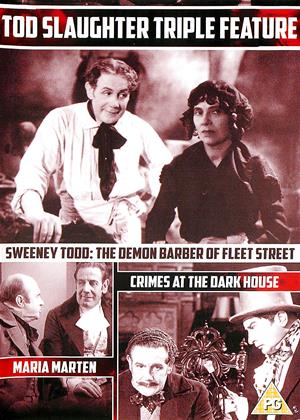 Synopsis:
London's dockside is teeming with ships and sailors who have made their fortune in foreign lands.

Sweeney Todd: The Demon Barber of Fleet Street
Tod Slaughter stars as a Fleet Street barber who amasses a tidy fortune by cutting sailors' throats and disposing of their bodies in...homemade meat pies. All goes well until he falls in love with a young woman and excites the jealousy of his elderly female accomplice.
Crimes at the Dark House
Victorian landowner, Tod Slaughter, cannot persuade his wife to sing over her fortune to him but is helped by Feate when her lunatic double dies of heart-failure not far from his house. He decides to switch the two women's identities in a devilish case of mistaken identity.
Maria Merten
Maria and gypsy Carlos are in love, but the wicked Squire, Tod Slaughter, has designs on Maria and makes her "suffer a fate worse than death". When she gets pregnant he does her to death in the red barn and is then haunted by her. The film was based upon a real life Suffolk murder case and the villain's scalp is still on exhibition at Bury St. Edmunds museum.
Actors:
Tod Slaughter, Stella Rho, John Singer, Eve Lister, Bruce Seton, Sophie Stewart, D.J. Williams, Eric Portman, Clare Greet, Sylvia Marriott, Hilary Eaves, Geoffrey Wardwell, Hay Petrie, Margaret Yarde, Rita Grant, David Horne, Elsie Wagstaff, David Keir, Trilby Clark, Warwick Ward
Directors:
George King, Milton Rosmer, Walter West
Producers:
George King, Odette King, Harry Rowson
Writers:
Frederick Hayward, H.F. Maltby, Randall Faye, Edward Dryhurst
Studio:
Odeon Entertainment
Genres:
Action & Adventure, Classics, Drama, Horror, Thrillers

Poor Tod Slaughter. For a few years at the end of the 1930s he was Britain's second-biggest horror movie star, eclipsed only by Boris Karloff, and truly a household name. Yet after the war interrupted his career along with everything else, he suddenly became a forgotten has-been who, long before his death in 1956, had fallen out of favour with the public so completely that to manage it nowadays he'd have to be exposed as a child molester. Which, in case you're wondering, he wasn't. So what went wrong?

Watching this triple bill - and it really is three feature-length movies on one disc, so purely in terms of quantity you get your money's worth - it's easy to see both why he was so popular back in the day, and why his fame was short-lived. When he suddenly became a movie star at the age of 50 in 1935 by starring in "Sweeney Todd" (making him, amazingly, one of only three actors to play the character on the big screen in the sound era, the other two being Johnny Depp in 2007 and whoever it was in Andy Milligan's "The Bloodthirsty Butchers" in 1970), his boo-hiss one-dimensional pantomime villainy was already old-fashioned, and wouldn't become fashionable again for another 30 years, by which time such clichéd baddies had literally become cartoon characters.

Which is why he's such fun. Never mind the rest of the cast. You've never heard of any of them, and they're almost without exception at best forgettable and sometimes downright awful (looking at you, Comic Relief Guy in "Maria Marten"), but that doesn't matter because they only exist in order to give Slaughter's baddie something to do. I don't think I've ever seen any other movie villain who was meant to be taken seriously literally twirl his moustache while cackling, but Slaughter actually does it in "Crimes at the Dark House", the least ridiculous, most genuinely menacing, and best-acted of these three very mild horrors.

In addition to this, the last film he made before his failed postwar comeback, the disc includes his first two movies. "Sweeney Todd", his breakout rôle, is absurdly hammy by today's standards, featuring a villain so blatantly evil that nobody in their right mind would let him anywhere near them with a razor in his hand, even if he didn't drop sinister hints about "polishing off" his customers every time he opened his mouth. It's also extremely tame, with absolutely no gore, and censorship so strict that they're not allowed to even mention cannibalism despite it being a major plot-point (they sneak it in under the radar, resulting in one magnificently dark joke). But it's low-budget unashamedly over-the-top melodrama from a more innocent age which they obviously didn't take all that seriously even in 1935, and if you appreciate it for what it is, it's a lot of fun.

"Maria Marten" is the weakest of the trio, perhaps because it's based (very loosely) on a sensational real-life murder case, therefore Slaughter has to play a character who, vile seducer and murderer though he is, might almost pass for a human being, and that wasn't one of his strengths as an actor. If he was around today he'd probably be doing the voices for all those motion-capture monstrosities whose first name is usually "Darth". It's not great. It's not even good in any conventional sense. But it's entertainment, and that's what counts. Tod Slaughter has to be by far the best so-bad-he's-good actor not to have a cult yet. Join now and be the coolest movie buff on the block when everybody else decides he's fashionable!