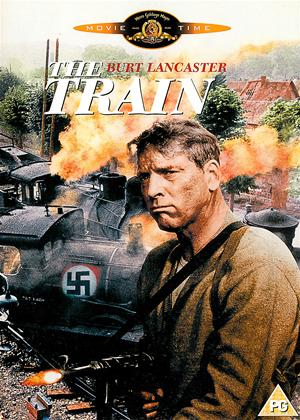 Reviews (2) of The Train

This is pretty much the perfect war movie, partly because, with the exception of a few scenes in which things get spectacularly blown up, it concentrates on the small-scale human cost of war. Burt Lancaster was always at his best when he wasn't typecast as a two-dimensional square-jawed good guy, but was allowed to play somebody you didn't necessarily have to like all that much. In this film, as in "The French Connection", the suave, sophisticated villain is on the face of it far more civilized than the crude, uncultured, and rather unpleasant hero, but nevertheless what he's doing is completely and utterly wrong.

The basic plot - as the Allies invade France, the Nazis attempt to send a looted horde of priceless paintings back to Germany, and it's up to a few hopelessly outgunned French resistance fighters to stop them somehow - explores the various ways in which a train might be delayed or diverted under the noses of hundreds of extremely suspicious Nazis. And it does this very well indeed, with the heroes employing schemes ranging from extremely elaborate subterfuge to the crudest and most desperate of sabotage as their numbers dwindle, with numerous moments of truly nail-biting tension.

But what makes it a real masterpiece is the human element. Lancaster's hero is never at any point in the film convinced that art is worth dying for, and initially wants to simply destroy the train because all that matters is to deprive the Nazis of valuable items they could buy a lot of tanks with. It's his cultured Nazi antagonist who cares about art - specifically modern "degenerate" art that Nazis aren't supposed to like - so much that he disobeys orders in a fanatical attempt to get the train to Germany simply because he can't bear to be parted from his beloved paintings. However, once good people who really care about abstract things like France's cultural heritage start dying, our unsophisticated hero becomes as relentless as his opponent, because even though his comrades died for something he doesn't believe in, they believed in it, and he's not going to let their deaths count for nothing. But every time he has to risk and almost certainly lose yet more French lives to save some pieces of colored canvas, he struggles with the temptation to blow the damn train up, or just let the Nazis have the stupid paintings.

So you've got plenty of interestingly varied action at regular intervals throughout the film, heroes who are undoubtedly the good guys, yet scared, flawed and fallible enough to be believable as human beings, and a bunch of Nazis getting exactly what they deserve, though in ways that make it clear that, while the Nazis were very bad indeed, war is never good, let alone fun, and should be avoided if at all possible. What more do you want from a war movie?

This is a fantastic war film shot in black and white to give it the authenticity that really works but cost it at the box office where technicolor was the more popular with cinema goers. A shame because this is a highly entertaining action film with a clever plot, superb editing and direction and has some great set piece scenes including train crashes and air attacks. Burt Lancaster plays Labiche, a Parisian railway manager who is also the leader of the local resistance group. It's 1944 and the allied armies are near to liberating the city. German Colonel von Waldheim (Paul Scofield) plunders the priceless artworks and intends to send them by train to Germany. Labiche is ordered to prevent this happening albeit he only does so reluctantly as he doesn't see the importance over saving people. Here is based the central theme of the film, whether art, however rare and priceless, warrants the loss of life. Director John Frankenheimer is content to make an exciting war adventure film with something to say over becoming too bogged down with a morality play and the result is a first class film that deserves discovery by todays film fans. Shot entirely on location in France and using mostly local actors it has the look and feel of the period and maintains a tense story throughout as it becomes a battle of wits between Labiche and his adversary to stop the train. A marvellous film and if you like a good war film then seek this out you will not be disappointed.