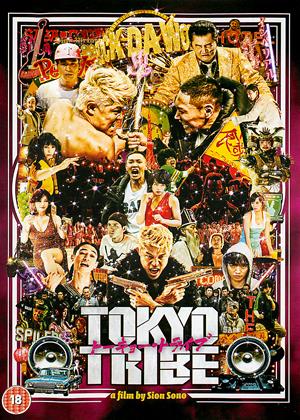 Synopsis:
Just when you thought Sion Sono's unique brand of subversive cinema couldn't get any more out there, he's back to explode expectations once again as he ventures even further into uncharted cinematic territory with an ingenious hybrid of Yakuza gang-action and hip-hop musical. In a futuristic, alternate-world Tokyo, the city is made up of ghetto slums and nightclub playgrounds where gangs of wayward youths rule the streets. The city is carved up into hoods, and the crossing of territorial lines quickly leads to riots and rumbles. On the turf ruled by the savage yakuza Big Buppa, the simmering tension is about to boil over into all-out war.
Who will emerge victorious? Territory, friendship, pride, love... Everything is put on the line in a desperate struggle for supremacy! Based on a popular Manga series and told almost entirely in rap verse (by some of Japan's leading hip-hop talent), 'Tokyo Tribe' has to be seen to be believed. The aggressive assault of the beats and rhymes wreaks havoc as a massive ensemble cast shocks, excites, and incites an unparalleled sonic war!
Actors:
Akihiro Kitamura, Ryôhei Suzuki, Tomoko Karina, Hitomi Katayama, Shôta Sometani, Yôsuke Kubozuka, Kokone Sasaki, Riki Takeuchi, Nana Seino, Shôko Nakagawa, Yui Ichikawa, Haruna Yabuki, Denden, Motoki Fukami, Shunsuke Daitô, Takuya Ishida, Miyuki Yokoyama, Mika Kanô, Hiroko Yashiki, Yoshiyuki Yamaguchi
Directors:
Sion Sono
Producers:
Yoshinori Chiba, Nobuhiro Iizuka
Writers:
Santa Inoue, Sion Sono
Studio:
Eureka
Genres:
Music & Musicals, Sci-Fi & Fantasy
Countries:
Japan, Music & Musicals, Sci-Fi & Fantasy

Time to break out the gold teeth, guns and girls....sigh. - Tokyo Tribe review by DS

Tokyo Tribe is a veritable explosion of colour, action and high-tempo rap and hip-hop music (I think, I am too old to know for sure). Now it would be nice to say it is great to see the Japanese spin on this type of music but there did not seem to be to me it was every US trope you see and so I was expecting gun-play, gold teeth and chains, gang-war, murder, women as sex-objects wearing little clothes and yup they were all there. Okay one of the main characters who could ‘look after herself’ was an attractive Japanese actor but when the leaping about kicking people started we got a fair few shots of her white knickers and in particular her crutch that I felt more than uncomfortable about.

I know it’s the ‘image’ of hip-hop etc, and this paints me as a Social Justice Warrior lefty libtard but if I am that then like the film I have just watched I am being true to my nature. Director Sono certainly does not let this phase and just ploughs through.

The ending of the film has been described as fun and upbeat and to an extent it is but unlike One Cut of the Dead what precedes it means it is hollow and pure fantasy. This is the basis of the film fantasy so perhaps I should take a deep breath.

Some of ‘beats laid down’ are good or merely okay and parts of the story as it bops along is funny or interesting but I cannot help feeling that in 2014 the director, Sono and Manga comic-creator Santa Inoue and could have made a mark, say something different instead of just following the path that I, a totally unhip old fart from the UK, was expecting it go.

After this film turning up as being highly recommended on various platforms I was disappointed. Clearly I am in no way the target audience and I suspect it will work very well with them, but nevertheless I did not expect to be thinking ‘really’ throughout the running time.

This was an attempt to make an all-action modern style West Side Story and in one way it succeeds but in another it fails. The audience for this will always be niche something that even haters of West Side Story cannot really claim.