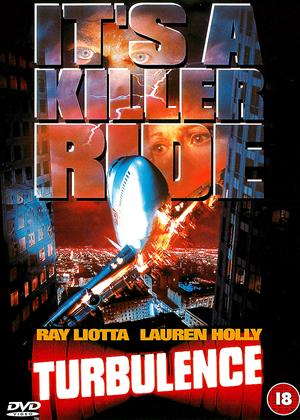 Sign up
The Fast and the Furious: Tokyo Drift

Turbulence isn't a subtle movie. Almost everything about it slightly stretches belief. If you're after a credible, serious thriller, this isn't for you - think halfway between 'The Silence of The Lambs' and 'Snakes on A Plane' and you have the amusing, faintly camp tone that's struck here.

When Lonely Hearts killer Ray Liotta is captured, law enforcement decides to fly him across the US for trial with Brendan Gleeson's foul-mouthed bank robber and a handful of government agents. The jumbo jet involved is almost deserted (11 passengers) due to the Christmas holiday and it should be a quiet flight...until a burst of quite nasty violence results in freedom for the unsavoury criminals who are now free to terrorise stewardess Lauren Holly and her crew...

The setting is fun and looks great - how many times have you seen a 747 with the insides adorned in twinkling lights and decorations?

Holly gives her character sweetness and steel at the same time, and makes for a good heroine. Her fellow crew are all pretty good and Gleeson surprises with his snarly hick lack of manners and foul comments.

Liotta is initially very good, introducing a genuine note of doubt - has he been framed as he claims? He seems to sweet, so well mannered and genuine...

However as the film goes on, everything becomes more absurd, from the stunts (convincing but daft), Liotta's behaviour (wild-eyed maniac) and all the typical terrorists on an airplane clichés. If you've seen it happen on a plane, it probably happens here.

The climax is quite nerve-wracking, and while very over-the-top it's a lot of fun. An abundance of silly moments balance out the occasionally nasty violence and tension, and they at least try to make the process of people flying a 747 seem frighteningly complex and semi-automated (far more than 'Snakes on a Plane' which ridiculously had someone land one because they were good at PlayStation...). In the end it's a film that succeeds almost because of its flaws rather than in spite of them. Yes, Holly's stewardess makes some stupid decisions, but it feels believable because of her compassionate character. The silliness also balances out the violence and the concept, which otherwise might have seemed too dark (murderous rapist loose on a plane with female stewardesses? That could've gone badly wrong in tone). As it is, Turbulence has about as much chance of an Oscar as I have at walking on Mars, but it's a fun, silly way to spend an evening.