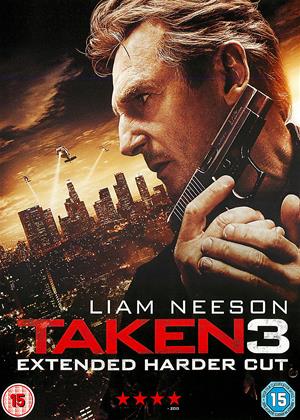 more of the same - Taken 3 review by gazmb

Its a good action film , the first film was the best one out of the three, two ok this is know worse , but perhaps it should definatley be the last one they should do , as there isn't really anything different than the other two. I enjoyed it as an action film.

too samey - Taken 3 review by PH

too predictable it was easy to predict what was going to happen in the film. The plot was sloppy and the acting in places was not good. Please let this be the last Taken as I think it has run its course.

I was very disapointed in Taken 3 there was no excitement and you could tell the plot within 5 minutes of the film, making the film tedious and pointless.

The Taken franchise has officially reached Death Wish status. In the sense that Charles Bronson had no death wish since he was an invincible force every time he hit the streets, Liam Neeson doesn’t need anything specific taken from him to go on a violent spree. The third in the Taken trilogy features Neeson reprising his role as an ex-CIA operative Bryan Mills for another round of running, gunning, torturing and tenderizing. This time he’s not searching for anyone, but rather something: his innocence. That may have been the intent, but, let’s be honest, the title of this series doesn’t hold any value. All that matters at this point is that Neeson kicks butt and to heck with a suitable script. Much like the Death Wish movies, this saga continues to keep Neeson an action star while the quality dips lower with each passing sequel.

Bryan’s ex-wife Lenore is thinking about rekindling her love for her ex, but their reconciliation is cut short upon her unfortunate assassination. Bryan discovers her body in the apartment and is immediately blamed for her demise by the LAPD. Now wanted and sought by the CIA, Mills is on the lamb playing fugitive as he seeks to find the true killers and their motivation. He’ll have to contend with both the well-meaning cops and the scummy Russians connected to the murder on his mission for the truth. The only ones who believe his innocence is his daughter and a handful of other ex-operatives who know the guy better. Mills relies on them to keep him informed, armed and provide moral support as he tracks down more clues about the secret evil organization which ruined his life.

This, of course, leaves the film plenty of room for lots of fights and car chases. The fight scenes are okay, but they are unusually routine for this franchise with Neeson merely firing off a few shots and performing some minor hand-to-hand combat. The car chases are absolutely ridiculous. One high speed race down a freeway results in a truck’s entire cargo cart becoming unhinged and flying into traffic. Imagine the look on my face when I watched this massive container that you need a crane to lift fly into the air and bounce off of multiple cars. But such a sight was nothing compared to when Neeson speeds toward a plane about to take off and swipes the landing gear off before it lifts. Neeson slams into this plane at maximum speed and not only survives the crash, but avoids spinning out of control or majorly damaging the vehicle. Either the plane is made out of plastic or his car is made out of the strongest material in the universe that even Superman couldn’t obliterate.

Rather than making Mills’ mad dash across a picturesque location like France or Italy in the previous installments, Taken 3 finds itself taking place entirely within Los Angeles. The cinematography does its best to film some high area shots to make the city seem grand. And there are some solid shots of the dusty valleys. But for most of the film we’re stuck in such bland exteriors as an innocuous high school, two convenient stores and the FBI offices where Forest Whitaker seems to be reprising his role as the talkative government desk jockey from The Last Stand (2013). Those hoping for a battle of Neeson versus Whitaker will be let down as Forest spends the majority of the movie pleading for Neeson to turn himself in while nervously shouting at his men to take higher precautions.

What was once a gritty action romp of a man trying to retrieve his daughter has mutated into your standard action revenge picture. Any ferocity that Neeson once had from that first picture is gone. The Taken series now exists as both a paycheck and vehicle to keep Neeson appearing as an action star. One has to wonder how much gas Luc Besson thinks is still in this string of movies. Even the writing seems to have grown tired as when Neeson assaults one of his attackers with his reused line “I will find you and I will kill you.” Only this time he mutters “I will find you and you know what will happen next.”