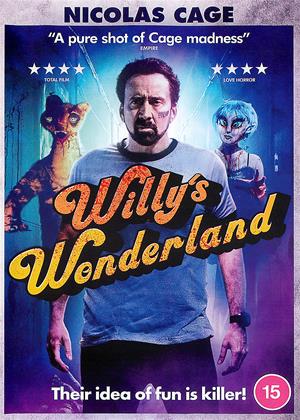 I mean what can I say. This film is terrible but in a great entertaining way.

Mostly predictable with who will get picked off but it's fun and trashy.

Nic Cage stays mute throughout and shows his usual lack of facial expressions throughout but here it works for him.

If you like fun trashy b movies with lots of pointless characters and no plot this is the film for you. It wont win awards but was hugely enjoyable ride.

This is probably the worst film I've ever watched. It has perfect examples of ham acting, poor dialog, and continuity glitches (Cage has a scar on his face before he actually gets that wound from an animatronic character) The effects are the cheapest, nastiest, most pathetic you could imagine. Cages unbelievable, deranged, silent character allows murder and mayhem to continue while he plays pinball. You know that thing people say about bad movies "There's 'x' amount of your life you'll never get back." You have no one to blame now but yourself if you watch it. Honestly it's 1hr 29mins of your life that you could better spend on almost anything else.

After seeing Color out of Space last year (which I really enjoyed) I began to forgive Nicolas Cage for his weird about-face over a decade ago into bad movies. Some films have also been very cool like The Trust (which he made with Elijah Wood) but then I got too enthusiastic and added Jiu Jitsu and Willy's Wonderland to my list. Sadly, Willy's Wonderland somehow fails to capitalise on its USP of seeing Nicolas Cage duff up a bunch of giant, furry, mechanical beasts. But it ends up being repetitive and ultimately boring and a bit naff. It's daft, and despite been well-shot, some aspects make it look low-budget. Beth Grant as the sheriff is good and dependable Cage is weird as the silent hero of the piece. Shame its got no ideas beyond the initial bizarreness of its concept.

Sorry, this was low energy - batteries not included. 1 out of 10.

Silly, daft and in fact throughly ridiculous but also weirdly good fun and made very entertaining because it in no way takes itself seriously. This is a comedy horror film, with plenty of gore, a bevy of teenagers there to be picked off one by one (never have sex in one of these films you're doomed if you do!) and Nicolas Cage in a dialogue free role. He plays a moody, enigmatic drifter who breaks down outside a small backwoods town and unable to pay for the repairs accepts a one night job to clean a dilapidated and boarded up children's birthday venue called Willy's Wonderland. But he has been tricked because this place has a dark, satanic secret although the stranger may have an agenda of his own. This is Cage at his manic best, he's a prolific film maker and many of his films are instantly forgettable with the odd gem that stands out. This is not a film that you'll want to watch twice but it is a fun filled 90mins that will make you chuckle.

Willy’s Wonderland is pretty wild for using Nicolas Cage in both the right and wrong way at the same time. He plays a mysterious stranger who wanders into a redneck town and proves himself to be a cunning fighter, capable enough to fight demonic puppets at an abandoned and haunted pizza place. However, Cage plays this role completely silent. Why? Cage is known for such over-the-top performances but you’re really only getting half the Cage when you strip him of his unhinged dialogue.

Of course, the bigger draw for a film such as this will be the concept. As an obvious amalgamation of the hype surrounding the video game Five Nights At Freddy’s, the story takes place inside a pizza place where the creepy animatronics come to life and kill people. The town has grown to accept this haunted spot as a crazed cult vowed to reign down terror on the community if the animatronics were not supplied with flesh. So Cage has been tricked into becoming a sacrifice to the demonic. Of course, it’s Cage so the mistake is on them.

I like the idea of how Cage approaches this situation. He has been told if he successfully cleans up the pizza joint overnight, he won’t have to pay for the repairs to his car. He does just that, even taking their advice to take breaks in between cleaning. The animatronics that attacks him is more like troublesome nuisances that get in the way of his job. I loved how he treats them as part of the job as well, taking breaks from fighting to go play pinball and drink some soda. Gotta take breaks!

A slew of teenagers stumbles inside as well so there can be a body count and more gore than just animatronics going violent. The way the animatronics kill is quite clever. Some of them use tongues, others eat heads, and some just use swords. The animatronics have varied personalities where it’s easy for a more innocent one to trick some of the stupid teenagers into coming closer for the kill.

Cage is committed to the job but also his breaks that he’ll simply refuse to help the teens at certain points. During one scene where he readies himself for another bout, he checks his blinking watch and takes a break, leaving a switchblade for the one teenager to defend herself.

Naturally, there’s a lot of camp to this type of B-movie and I can appreciate some of its vigors. The problem is that much of its creepiness and weirdness wears off early. By around the second act, the pattern becomes clear and there’s very little surprise from then on. The most shocking scene is one of the gorier moments where law enforcement gets sliced in half. The legacy of the pizza place also isn’t that compelling considering how standard the plot of the pizza place being run by pedophiles, serial killers, and Satanists. I’m surprised they weren’t doing more, honestly.

Willy’s Wonderland almost works and it’s so aggravating that it never quotes achieve B-movie greatness. The film rests too easily on its setup that anyone who has played Five Nights At Freddy’s is quite familiar with. It’s about as good as a FNAF movie could be and even on that level, it serves the purpose of why such an adaptation shouldn’t have gone all the way.