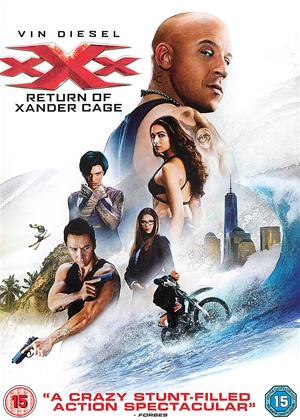 Being a fan of Vin Diesel and enjoying many of his other films, it is inevitable that now and then an actor will appear in a dud, something which makes you question why it was made in the first place, or perhaps it was made as a tax write off, this is one such film! Within the first five minutes I could see where this was going, using Samuel L Jackson to almost tentatively create a link between his character in this series and his character in the Marvel movies as a recruiting agent of S.H.I.E.L.D., thus suggesting that the character of Zander Cage, has an almost Superhero like quality, which in this film he most certainly does not have! An ageing Vin Diesel plays the part as though he's still in his 20's and the whole film was made as though to appeal to 15 year old adolescent boys, who enjoy gawping at a bit of skirt, as this film is excessively and unnecessarily filled with scantly clad women showing of their assets in a crass and very tacky way, similar to elements of the Fast & Furious series, as though semi naked beautiful women will make up for the lack of a plot! And the plot in this film is dire, as is the script, directing and general production, the whole film looks like it was made with Vin sleepwalking through his part, because even he realised that it was going to be a dud and wanted out fast! It's such a shame as the first film in the Trilogy was brilliant, I've never seen the second one which doesn't feature Vin, but why this one was ever made, who knows!

About 200 soldiers killed who cannot shoot straight, or taker cover.......... by young ladies who can barely hold a gun up. Vin has 17 year old girls shaped like boys all over him. Lots of boring dialogue interspersed with loud and explosive action shots.

If you like stunts, there are a couple of good ones here: a skateboard escape at the beginning and a motorbike chase on water half-way through. As for the remainder, it’s the usual Vin Diesel macho sexist rot.

This movie seems to have been a series of absurdly over-the-top action sequences stitched together with the basic outline of a plot, which was then filmed without bothering to write the bits in between the action sequences. A couple of times I was left confused by the sudden advancement of the story with little to no explanation of what was going on. The action sequences were enjoyable, but having a coherent story would really help its rating from me.

xXx: Return of Xander Cage, although peculiarly named, is the third instalment in the accidental innuendo named the triple “X” series, now seeing the titular character Xander Cage (played by Vin Diesel) embark in his newest espionage-turned-explosive-action quest in order to, I guess save the world? However, Xander Cage (already declared dead, but for some reason brought magically back to life) is now 15 years older, meaning he’s less mobile, agile, and overall looks like he could grandfather two nephews in the least. But, despite these obvious shortcomings, Xander is back and is ready to kick some butt. Or is he?

As we go further, it’s clear the writers had some very creative ideas about their characters and consequently their characters’ unique treats; one of them being Donnie Yen kicking ass, and Thai superstar Tony Jaa kicking less ass in this particular role – which is kind of a shame when you come to think of it. These characters are entertaining on their own, but with no sense of any real danger involved, they may well have been escapees from a looney toons cartoon for all its worth.