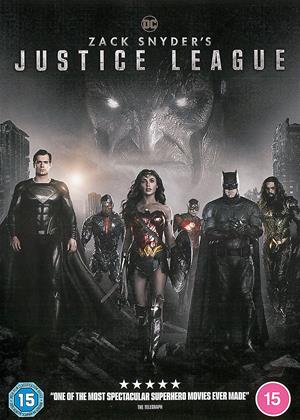 Is it over yet... - Zack Snyder's Justice League review by SH

So I'm writing this review after watching disc 1. Yes, you heard me right, disc one. And I'll be honest, I'm underwhelmed. If you think your going to be seeing a totally different movie, you'll be disappointed. Its basically the original movie just longer and not in a good way. There are some new, tiny elements that are good additions to the film but after over two hours you end up with 2 feelings. One, I've seen this before. Two, do I really have to watch another disc.

I'll add an additional review tomorrow after watching disc 2... if I have the will!

In my opinion this considerably longer version of The Justice League is a much better film than the original two hour release. I found the original to be a dull and shallow production and didn't really enjoy it, I didn't even see the film through to the end the first time I watched it. The drab DC palette remains but there is more depth and background to the characters and what they have been up to.

If, like me you enjoy a superhero movie and are unsure as to whether this is going to be a bleak four hour bore fest I can say for me it wasn't, I enjoyed the it.

Between 2016 and 2017, Zack Snyder’s Justice League movie was not going according to plan. Despite Batman v. Superman still being a box office success, the negative critic and fan reactions led to Warner Bros scrambling to restructure all these dominos they had in place. Suicide Squad became the first casualty as David Ayer’s film was wrestled away from him in the post-production phase. Wonder Woman somehow avoided this hammer by Warner Bros but Justice League was becoming a much larger concern. There had been problems with the script for a long time, to the point where Chris Terrio was trying to tell Geoff Johns “maybe TRY using some of my pages.” WB was also not happy with the rough, unfinished cut of the film and decided to remove Snyder from the equation, favoring Joss Whedon to come in and finish up the film with reshoots.

Snyder’s cut was never finished but fans held out hope that it did exist and that Warner Bros should release it. Cue the social media campaign for demanding something that doesn’t exist. Now, yes, we have the Snyder Cut of the Justice League movie but it was not, as the #ReleaseTheSnyderCut campaign would have you believe, sitting in a WB vault. It took roughly $100 million (on top of the $300 million initially spent) to make this cut even happen. But, hey, we get unfiltered Snyder! This is the film he wanted to make and not just the chipper JL movie that Warner Bros demanded. And the result is...still not a very good movie.

Sure, a lot has improved over the previous cut. The story still remains with the Apokolips errand boy of Steppenwolf trying to attain the mother boxes and conquer Earth for his master Darkseid. But we do get to learn more about Steppenwolf. We see him as a minion desperate to prove himself, has been in debt to Darkseid, and fearing when his lord comes with calling for updates. Event the presence of Darkseid’s messenger DeSaad strikes fear within him. He also has an improved look that makes him look less like a melting wax sculptor.

The heroes that come together have far better arcs but, really, Cyborg (Ray Fisher) steals this film. What was once an outsider element of the film now goes through a tougher ordeal of trying to handle his new form alongside his well-meaning but morally-adrift father of a scientist. His full capabilities are explored and paint him as the one character with the best pathos. The ultimate resolve of how the League defeats Steppenwolf is far more clever and actually makes Batman’s nightmares from BvS make more sense. Heck, the whole movie makes more sense with the super extended running time.

But while the film does make some improvements, all of Snyder’s shortcomings are more vibrant here than ever before. Were you annoyed with Snyder’s abundance of slow-motion in Watchmen and Sucker Punch? You’ll get MINUTES of it straight in sequences that go on for so long that he can shove a full music video into these scenes. Remember Snyder’s heavy reliance on Christ allegories in Man of Steel? There’s a whole bucket of that present in this picture. Remember how Batman’s nightmare seemed random in Batman v. Superman? It’s even more random here and still acts like a preview for a film that will never come.

For reference, I thought Whedon’s JL was okay. So when I say that Snyder’s JL is also okay, it’s not exactly the heaviest of compliments. A lot of what I disliked about 2017’s Justice League has thankfully been taken out of this version, which includes the removal of Superman’s CG lip to remove a mustache and the dead-in-the-water sexual tension between Batman and Superman. In its place, however, we get a meandering Aquaman, an obnoxious reveal of The Flash, and a questionable length for everything in this film. It’s only when watching this version and trying to look at the film like an editor when Warner Bros’s desperation becomes more understandable rather than being fully unjustified. There was no way to salvage such a bloated and pretentious superhero film but at least it now exists so that so we won’t get anymore #ReleaseTheSnyderCut nonsense.

Oh, wait, now there’s a #RestoreTheSnyderVerse campaign that’s being unwarrantedly spammed over all of Warner Bros films. So what did we all learn from this experience? Nothing, apparently.