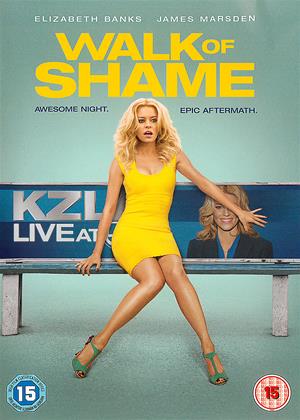 Synopsis:
After losing an audition for her dream job, Meghan Miles (Elizabeth Banks), a Los Angeles TV news anchor, goes out for an uncharacteristic night of partying. She awakes up in Gordon's (James Marsden) bed, a complete stranger, to a phone message announcing the job is hers but only if she can make it to the news station by time of broadcast. Stranded in an unknown area without money, a phone, and a car, Meghan - clad in a provocative yellow dress - embarks on a series of misadventures. As she races to the most important job interview of her life, she finds herself among drug dealers and hookers - all while being pursued by the LAPD, an angry taxi driver, and a young kid with an attitude.
But against all odds, will Meghan be able to land her dream job in the nick of time?
Actors:
Elizabeth Banks, James Marsden, Gillian Jacobs, Sarah Wright, Ethan Suplee, Bill Burr, Ken Davitian, Lawrence Gilliard Jr., Alphonso McAuley, Da'Vone McDonald, Eric Etebari, Oliver Hudson, Jacob Timothy Manown, Carol Mansell, Bryan Callen, Tig Notaro, Willie Garson, Erin Segal, Chris Conner, Liz Carey
Directors:
Steven Brill
Producers:
Sidney Kimmel, Gary Lucchesi, Tom Rosenberg
Writers:
Steven Brill
Studio:
Gilt Edge Media
Genres:
Comedy, Romance

Reviews of Walk of Shame

There’s something very off-putting about these sexual comedies using incorrect terminology. The walk of shame has for decades been referred to as when a college student makes the walk back to their dorm after a one night stand in another dorm. The film Walk of Shame seems to confuse every ounce of the old saying as if it were an elder using phrases he doesn’t understand. Instead of a student sulking back to the comfort of their living accommodations, a plucky reporter struggles to make it through the streets of New York after a night of drunken sex with a stranger. I’d much rather have this film take place on a college campus so there would at least be a higher chance of avoiding the offensive stereotypes and cliches of an unforgiving urban landscape.

This is a film that kicks a nervous wreck of a TV anchor down a deep, dark hole. In one night, charming anchor Meghan Miles (Elizabeth Banks) is mistaken for a hooker and junkie of various varieties by an array of awful cartoon characters. What brings about this misconception? Her car is towed, her purse is left at her one-night-guy’s pad and her only outfit is a yellow dress that is deemed slutty by her friends who intended as much. This poor woman hasn’t done a thing to deserve such a night. Stressed out over losing out on a promotion to someone else, she decided to have a party night with her gal pals to dance her cares away. She drinks a bit and goes home with the sweetest man to spend the night with played by James Marsden. Awoken the next morning by her phone, she discovers that she may still get the promotion if she can make it to the studio in time for the news.

But her absent-minded sensibility leaves her hoofing it to the car lot on foot. With no money and a tight yellow dress, she is subjected to the horrible streets of New York’s offensive nightlife. There is not a single person on the street who will help this woman. A cab driver only agrees to give her a ride if she gives him a lap dance. The cops mistake her for a prostitute and give her a warning to get off the streets instead of listening to anything she has to say. A bus driver sprays Meghan with mace for attempting to explain why she needs a ride. The only figures who are helpful to her on her journey is a pack of well-meaning hoodlums who provide her a temporary cell phone (which she can’t use since she doesn’t recall any important phone numbers). As targets for the cops, they can’t help her much and send her on her way with a handful of crack.

What has this woman done to deserve any of this? We never establish her as some sort of racist or elitist that needs to learn a lesson. The conclusion she comes to at the end feels very much like an afterthought about feminism and media culture in which Meghan gives the “nothing to be ashamed of” speech for how she dresses. That’s a decent enough speech, but what does the film really say about society by the end of this farce? It suggests that women should never go out drinking with their friends while wearing revealing clothing and meeting nice men. If you do, your airhead friends will ditch you, the cops will hunt you down as a whore and every man on the street will want to either see your boobs or make you pleasure them.

This isn’t some savage satire of America’s disconnect for treating women based on pre-conceptions; this is a farce of stereotypes where the audience is expected to laugh at how stupid women are and how sexist men act. The only thing admirable about any of this is that it at least didn’t dip into the pit of gross-out humor. Though every single man on the street is insulting and vicious, none of them ever whip out their penis or force Meghan to go down on them (though they talk about it much longer than any human being on Earth). All the women appear as brain-dead comedy puppets, but none of them go to the lengths of smearing period blood on the floor (and, yes, movies with this element do exist). The lack of all the grossness at least elevated the film from “crime against humanity” to “unbearably offensive”.

Walk of Shame needs to take a hike. If its length of distance to walk off its shame is measured by its offensiveness, this film needs to walk all the way to Antarctica where it can seclude itself in a tundra to be forgotten in a cave of ice. When even a Jewish student devout to his teachings wants Meghan to indulge his fantasies for money, there is no hope left for humanity. Granted, all he wants is for her to sing a song, making him the least sexual of all the paying perverts (though he appears to get off to her voice). But you know what would’ve made him a better character? Helping her get home! Meghan is instead trotted around the urban area as a sexual puppet who must complete quests and outsmart deranged citizens to make it to work. She is not seen as a human being; she is the “bitch from the news.”