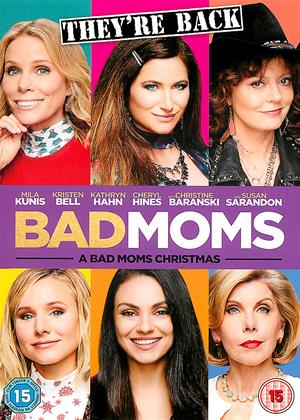 Synopsis:
"A Bad Moms Christmas" follows our three under-appreciated and over-burdened moms (Amy, Kiki, and Carla) as they rebel against the challenges and expectations of Christmas in hopes of creating a more perfect holiday for their families. And if that was hard enough, they have to do all of that while hosting and entertaining their ultimate holiday foes: their own mothers. By the end of the journey, our moms have redefined how to make the holidays special for their families and it ends up bringing them closer to their own moms.
Actors:
Mila Kunis, Kristen Bell, Kathryn Hahn, Christine Baranski, Susan Sarandon, Cheryl Hines, Jay Hernandez, Justin Hartley, Peter Gallagher, Oona Laurence, Emjay Anthony, Lyle Brocato, Wanda Sykes, Christina Applegate, Cade Mansfield Cooksey, Ariana Greenblatt, Jacks Dean, Madison Muffley, Kenny G, Phil Pierce
Directors:
Jon Lucas, Scott Moore
Producers:
Suzanne Todd
Writers:
Jon Lucas, Scott Moore
Aka:
A Bad Mom's Christmas / Bad Moms 2
Studio:
Entertainment In Video
Genres:
Action & Adventure, Comedy

Reviews (3) of A Bad Moms Christmas

Terrible film. Not at all funny - A Bad Moms Christmas review by AS

This is really trying tobe a girl power movie but it just lacks humour and is overloaded with clap trap sentimentality. If you weren't a fan of the first movie you certainly won't like this one

the 1st Bad Moms was ok - this is dreadful and Im sorry - what the heck was that song on the end credits?" F**king this, F**cking that" really not appropriate at all

Not funny, not clever, not at all good

Dreadful film and no endearing aspects - at all. But daughters seems to think it's OK. What do I know?

Rushed out in just a year after the success of the first film, Bad Moms Christmas comes with a slapped together nature of Christmas cliches that unfortunately removes the more biting nature of Bad Moms. It seems to start off with a solid concept, about the previous moms-gone-bad stressing out over the holiday where they’re expected to do everything from cooking to shopping to decorations. There’s one gleaming moment of rebellion they have at the mall where the three of them decide to cut loose. Enjoy this Bad Moms moment because it won’t last.

The central story doesn’t allow much wiggle room for the trio of Mila Kunis, Kristen Bell, and Kathryn Hahn to be the bad moms they once were. That’s mostly because they now have to deal with their visiting mothers played by Christine Baranski, Cheryl Hines, and Susan Sarandon. They’ve come for the holidays and present so many new problems that the film, unfortunately, resorts to cliche plots. Christine Baranski plays the spoiling mother who wants Christmas to be big and expensive while Mila Kunis wants the holiday to be more low-key; hard to do when grandma keeps giving the kids expensive gifts. Cheryl Hines is smothering her daughter of Kristen Bell by trying too hard to shove herself into every aspect of her life, including her sex life. And Susan Sarandon is facing money problems, forcing Kathryn Hahn to make the tough call of whether or not to help out mom.

It’s not that the sentimentality of A Bad Moms Christmas isn’t devoid of entertainment. There are some rather sweet moments between Sarandon and Hahn in particular. But the problem is that none of it comes with bite and all these mother-daughter stories stay to their own lane. Don’t ever count on the plights of Kunis, Bell, and Hahn crossing paths until the inevitable Christmas dinner. Even when the bad grandmas finally meet up, it’s more of a review than a crossing over of plots. Why must a film about being close with family be so distant with its characters? The few times they actually meet are in a blatant commercial for Sky Zone, complete with panning overhead shots and slow-motion jumping on the store’s trampolines to drive home that advertising.

The raunchy humor is still present yet seems more sedated than usual. The most outrageous of scenes features Hahn waxing a handsome male stripper that she courts during her job of stripping off the hair. And yet their meeting somehow seems expected. After all, how much wackiness can be whipped up from such a scene beside Hahn commenting on or not trying to look at his bare genitals? Even their brief make-out scene at Christmas dinner is toned down before getting too out of control. One of the few scenes that made me laugh was Kunis telling Kenny G to get out of her house but, again, its a gag by design. Not much will catch anyone off-guard here.

Aside from a strong scene of Kunis, Bell, and Hahn going nuts in the mall with booze, Christmas tree stealing, and twerking for the mall Santa, there’s little to push this rushed Bad Moms sequel past being a forced cash-grab of a lesser Christmas special. It spins a lot of familiar gags and even waters down a few of them, all in the name of making the film a little more sweet than sour with frustrated parents. And considering that just a month later Daddy’s Home 2 would pull this same format, it’s a tired one that holds about as much appeal as a tedious family reunion, where you wish the relatives would depart so that the characters can go back to being interesting people.