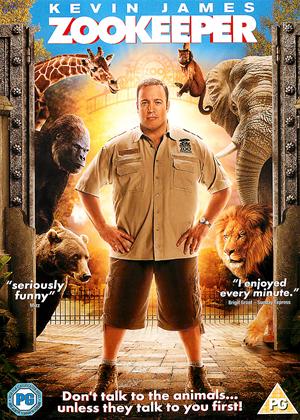 ‘Zookeeper’ took five writers – five – to complete. And one of them is actor-producer Kevin James. If that’s any indication of how ‘good’ a movie is, then it should be a gauge on how brave you are to spend your hard-earned cash.

‘Zookeeper’ is a Happy Madison production, meaning it has the blessing of its boss Adam Sandler; in fact, he voices the capuchin monkey in the movie, and yes, it is about a lovesick man-child – yet again – starring frequent collaborator Kevin James. In ‘Zookeeper’, James is a lonely zookeeper who is kind to his ward of animals but the woman in his life is unkind to him. After an elaborate marriage proposal, he gets rejected and has been wallowing in self-pity ever since. In come the zoo animals to the rescue – sort of.

With a gaggle of star-studded actor-voiced CGI animals: Sylvester Stallone (lion), Cher (lioness), Nick Nolte (gorilla), Sandler (monkey), Judd Apatow (elephant), Kevin James’s zookeeper is the right hands… right? Animals will be animals and if they’re wildness has been tamed for being in the zoo for long, their ‘game’ isn’t exactly trustworthy. Pee to mark your territory?

Fling poop at your beloved? Right, those would work to woo back a woman into your life and fall madly in love with you. Have you hit rock bottom that you would seek the advice of zoo animals for the betterment of your love life? And also, how lucky of a schlub is Kevin James that his character gets to choose from hotties Leslie Bibb and Rosario Dawson as a love interest? Aren’t his love problems a dream?

‘Zookeeper’ is trying to be a PG-rated family flick but its stance is romantic comedy with a bit of slapstick. Confused and inappropriate for kids, ‘Zookeeper’ wants to bring on the funny but fails miserably so.