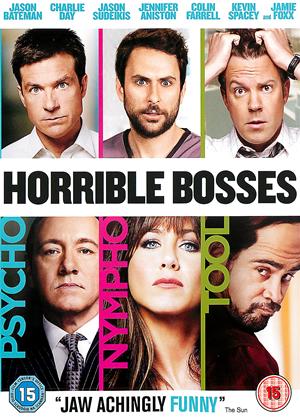 Synopsis:
For Nick (Jason Bateman), Kurt (Jason Sudeikis) and Dale (Charlie Day), the only thing that would make the daily grind more tolerable would be to grind their intolerable bosses into dust. Quitting is not an option, so, with the benefit of a few too many drinks and some dubious advice from a hustling ex-con, the three friends devise a convoluted and seemingly foolproof plan to rid themselves of their respective employers... permanently. There's only one problem: even the best-laid plans are only as foolproof as the brains behind them.
Actors:
Jason Bateman, Charlie Day, Jason Sudeikis, Steve Wiebe, Kevin Spacey, Lindsay Sloane, Michael Albala, Jennifer Aniston, Jennifer Hasty, Reginald Ballard, George Back, Barry Livingston, Meghan Markle, Donald Sutherland, Celia Finkelstein, Colin Farrell, John Francis Daley, Scott Rosendall, P.J. Byrne, Dave Sheridan
Directors:
Seth Gordon
Voiced By:
Brian George, Seth Gordon
Writers:
Michael Markowitz, John Francis Daley
Studio:
Warner
Genres:
Comedy

Film is about three friends who have "horrible bosses". Unfortunately the film is terribly predictablem has a poor script and cant be saved by A listers Kevin Spacey or Jennifer Aniston. This wasn't the least bit funny, leave well alone.

While the storyline appears to be fairly conventional at first, this witty comedy surprises the audience with clever twists and a humorous outcome. The basic plot revolves around three old friends, Nick, Kurt and Dale (Jason Bateman, Jason Sudeikis, Charlie Day), who meet on a regular basis to complain about how evil and twisted each of their bosses are (Kevin Spacey, Colin Farrell, Jennifer Aniston). On a particularly bad day, the idea of doing away with their bosses is so appealing that they begin plotting to have their bosses killed. This leads to several entertaining and funny situations as they realise just how complicated the task is, and consider whether they are actually capable of murder.

The three main actors do a good job of convincing the audience just how much they hate their bosses. They had great chemistry on screen, making their characters quite likable, and the story all the more funnier. The three high-profile actors that play their bosses don't disappoint either. Jennifer Aniston is particularly good in a role that is very different from her usual comedy, and Kevin Spacey was the perfect choice for the worst of the three bosses. The story was well structured with some sharp comedy that's a refreshing change from the usual toilet humour coming out of Hollywood. It is well complimented by good directing and original score.

Overall, Horrible bosses is definitely one of the funnier comedies of the year, and is an entertaining and enjoyable watch.

Aboslutely one of the funniest movies. The actors play both predictable roles (Spacey) but also some way out of their normal roles (Aniston) that combined make it really funny. I absolutely loved this film.

Horrible Bosses is the directorial follow up from Seth Gordon to rom-com Four Christmases. Once again the film serves up an ensemble cast of Jason Bateman, Charlie Day, Jason Seduikis and Jennifer Aniston, Kevin Spacey, Colin Farrell who play disgruntled employees and their respective bosses.

As the title suggests the film is about a group of men who hate their bosses; two of whom are abusive and the third of which is a drug addict. The three employees’ decide to murder their respective bosses and what follows is a series of mishaps, coincidences and accidents that ruin the trio’s plan.

Overall the film is predictable and unoriginal, as the premise somewhat suggests; full of typical boyish-comedy and blatant twists. However the cast makes the film bearable, even pleasantly surprising in places. Aniston’s performance is a treat after some poor comedic roles previously whilst the unexpected appearance of Kevin Spacey is excellent, as ever.

The film is exactly what you would expect it to be, funny in places, obvious throughout and had the cast have been different the film could have been a real shamble, but luckily the talent of huge stars like Spacey and Aniston and a surprising show from Bateman lift the film into an above average movie that’s quite enjoyable in it’s own way.