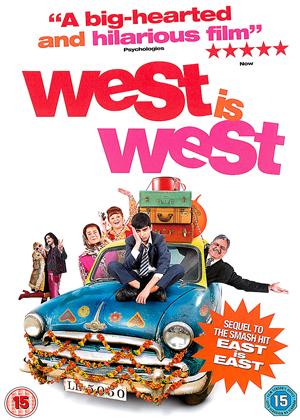 Synopsis:
Sequel to the internationally acclaimed, multi-award winning East is East, West is West takes the Khan family on a journey from Salford, England, to rural Pakistan. West is West is the coming of age story of both 13 year old Sajid and also of his father, 60 year old George ('Ghengis') Khan. Sajid, the youngest Khan has been misbehaving so his father decides to pack him off to Mrs Khan No 1 and family in the Punjab, the wife and daughters he had abandoned 30 years earlier. Resolved to teach Sajid a lesson, the tables are turned on George as he realizes that it is he himself who has much to learn.
Actors:
Aqib Khan, Om Puri, Linda Bassett, Robert Pugh, Thomas Russell, Lesley Nicol, Jimi Mistry, Vanessa Hehir, John Branwell, Yograj Singh, Vijay Raaz, Karamjit Anmol, Sanjeev Attari, Raj Bhansali, Dhanalaxmi Padmakumar, Sheeba Chaddha, Ila Arun, Emil Marwa, Nadim Sawalha, Kamal Arora
Directors:
Andy De Emmony
Writers:
Ayub Khan-Din
Studio:
Icon
Genres:
British Films, Comedy, Drama
Countries:
UK

Reviews (2) of West Is West

usually the sequels are never as good as the first, but i can honestly say i found this film was just as good as east is east if not dare i say it better. it was really funny and quite moving. i would definatly recomend watching this film. if you enjoyed east is east you wont be disapointed.

Thumbs down - West Is West review by CP Customer

How very dissapointing was this film,Thought it would have had the same lol factor as in east is east but this was very dry and bland.10years to do a sequel.Dont think they should of bothered.

The belated sequel to 1999’s East is East, West is West follows along much of the same themes. Set in 1975 in Manchester in the North of England a British-Pakistani family, the Khan’s, struggle to balance their behaviour and beliefs between their tyrannical and strictly Muslim father and British mother.

East is East was a surprising hit; a comedy with a disturbing and moralistic edge. West is West is clearly aiming for the same effect twelve years on. Now rather than be concerned with the eldest son’s refusal to accept a traditional Muslim marriage and instead leave to become a fashion designer and suspected homosexual like East is East; West is West focuses on the youngest son of the family who is being bullied at school due to his mixed ethnicity and eventually is sent to Pakistan to live with his father’s first wife in an attempt to quell his rising delinquency.

Although West is West still deals with the troubling subject of race, somehow does not manage it with the ease of its predecessor. Where East is East was grounded more in the emotional and familial experience of the characters somehow West is West seems to take a more contextual approach; you can’t help but feel as though it’s trying to explain some of the current issues of immigration to the more ignorant members of its audience.

This ultimately lessens the impact of the film’s theme and it seems somehow simply to float somewhere on the surface, supplying cheerful and easy-going gags along with a handful of emotionally poignant moments that get a little lost in the gentle comedy.