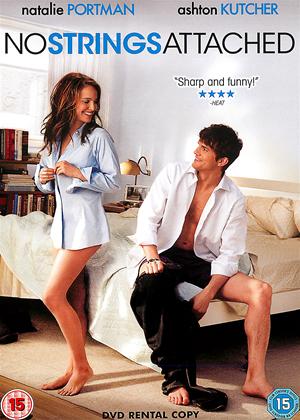 Reviews of No Strings Attached

Can you just be friends with the person you have sex with?

That’s what ‘No Strings Attached’ wants to attempt to answer, casting the ‘friends with benefits’ parts to Natalie Portman and Ashton Kutcher. Gorgeous much? In it, Kutcher is Adam, a downtrodden scriptwriter who has been dumped by his girlfriend (Lake Bell) for his once-famous sitcom star dad (Kevin Kline.) Portman is his doctor friend Emma, a non-believer of love and staunch supporter of casual sex. One drunken night, Adam and Emma do the nasty, and the rest is F-buddies history. At first, the setup is working fine, but glitches occur because so-called feelings develop between them. During their worldly shenanigans, Adam’s and Emma’s roommates/best friends put more than two-cents in on their ‘relationship’. From there, you get an ongoing debate via a formulaic romantic comedy.

‘No Strings Attached’ is directed by Ivan Reitman, whose last attempt at an unconventional romantic comedy is 2006’s ‘My Super Ex-Girlfriend’. The pacing of the film is pretty standard. The chemistry between Ashton Kutcher and Natalie Portman is evident and not cringe-worthy; what’s highly suspect is Portman’s angst. It doesn’t really flesh out why her character Emma’s so allergic to sex with meaning a.k.a. love.

The dialogue is funny enough; made only funnier with the movie’s supporting cast. In Portman’s corner are Greta Gerwig, Mindy Kaling, and Guy Branum; on Kutcher’s are Jake Johnson, rapper Ludacris, Lake Bell, and the hilarious Kevin Kline. If not for them, ‘No Strings Attached’ would have been reduced to a movie you’d buy from accidentally fishing it out of the sale bin because you have an extra pound or two. At least for the great supporting cast, you get biting, funny one-liners. It’s not that much of a loss, after all.

‘No Strings Attached’ is a cookie-cutter Hollywood romantic comedy. Its premise seems to be daring, something that could be an eye-opener to most, but not really. In reality, friends with benefits do happen; whether or not they progress into a formal relationship or remain casual is anyone’s guess.