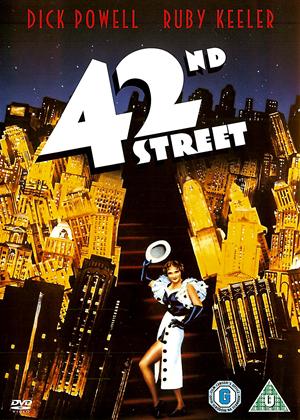 Not released
Gold Diggers of 1933

The greatest backstage musical of all offers a vicarious glimpse of life on Broadway in the thirties while it also reflects the hardship of the depression. It is one of the the great films about the fallout of 1929 because it approaches it obliquely and through the filter of the musical, rather than risking the sanctimony that was sometimes Hollywood's way back then when covering social issues.

Most of Lloyd Bacon's film is a fairly realistic comedy about a company coming together, characters who would become archetypes. The lecherous sugar daddy (Guy Kibbee) putting up the money. The hardboiled, driven stage director (Warner Baxter) struggling under pressure and giving the company hell. The sassy, wisecracking, starving dancers led by Ginger Rogers and Una Merkel. Bebe Daniels as the hot tempered diva; Dick Powell as the pretty, romantic juvenile.

And of course, as the ingenue who gets her chance when the star goes down lame, Ruby Keeler, who, in the immortal words of Julian Marsh (Baxter): 'Sawyer, you're going out a youngster but you've got to come back a star!'. The punchy dialogue is a treat.

This is Warner Brothers and we get characteristic unpretentious proletariat scenarios. But the last sixteen minutes are gloriously co-ordinated by the legendary dance director Busby Berkley in a trademark expressionist style. Three great numbers, written by Dubin & Warren. Shuffle Off to Buffalo with its innuendo and huge train interior. Young and Healthy with its geometric human shapes viewed from the gods and the tracking shot through the legs of the chorus girls. And best of all the brilliant title showstopper 42nd Street. OK, Keeler dances like a horse, she's overweight and her acting is a problem. But the song is immortal, and Berkley's living tableau of the Great White Way channels a metropolitan mythology which is rich and joyous.

Captures the spirit of the times. The speech is fast and the action entertaining, but hugely enjoyable.