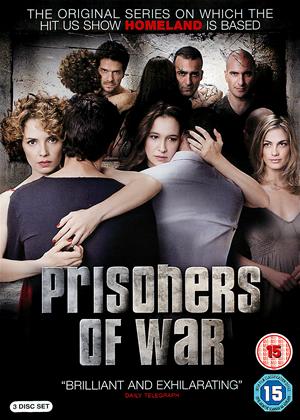 Synopsis:
"Prisoners of War" is the gripping ten-part drama on which the American series "Homeland" is based. When three Israeli Defence Force reservists are captured behind enemy lines in Lebanon their fate is unknown, that is until seventeen years later, when they mysteriously return - two of them alive, the third in a coffin. The story of their time in captivity unfolds as they attempt to reintegrate into society; trying to cope with the pressures of being reintroduced to their families and friends, as well as handling the national hero status being thrust upon them via the public limelight.
The griping plot unravels through three time plains; before capture, life in captivity and present day, which all intertwine to reveal dark secrets about their life in captivity.
Actors:
Yaël Abecassis, Mili Avital, Edna Blilious, Assi Cohen, Salim Dau, Yael Eitan, Adi Ezroni, Ishai Golan, Nevo Kimchi, Guy Selnik, Shmuel Shiloh, Yoram Toledano, Gal Zaid, Yaara Pelzig, Sendi Bar, Abdallah El Akal
Directors:
Gideon Raff
Producers:
Liat Benasuly
Creators:
Gideon Raff
Writers:
Gideon Raff
Aka:
Hatufim
Studio:
Arrow Films
Genres:
TV Dramas, TV Political
Countries:
Israel

Reviews (3) of Prisoners of War: Series 1

This is a fabulous series--more intriguing and far subtler than the spin-off, Homeland. It's believable while at the same time having a slightly surreal undercurrent. The emphasis is on the psychological and the characters have real depth. Can't wait to see series 2. While Homeland quickly disappointed, Prisoners starts from a stronger foundation and promises to become more complex as it goes on.

It's an Israeli TV series so it's in Hebrew with subtitles - but don't let that put you off, this really is great stuff.

I understand that the US TV series 'Homeland' is based on the Israeli series but I haven't (yet?) seen that so can't compare the two.

'Prisoners of War' tells of three Israeli soldiers captured in Lebanon and held captive for 17 (!) years. Two return alive after a prisoner exchange, the third died in captivity. The story follows events as they attempt to re-integrate with their families - and of course over that time there have been changes, major changes in their lives. The story of their experiences in captivity are told with graphic flashbacks of torture and interrogation - and indeed they are also interrogated by their own side in case they have given away any information that would be a danger to national security.

In part a psychological drama, in part a soap opera, this is gripping stuff with excellent characterisation. At times it is slow moving, but this only adds to the tension as Season 1 builds to a climax - leaving a hook for Season 2.

I have no experience of life in Israel and have watched no Israeli TV before yet 'Prisoners of War' gave me a (perhaps false?) sense of what it might be like to live under constant threat. There is no preaching, no Arab/Israeli politics - just a superb human drama.

This is the series 'Homeland' is based on - and this is much, much better. Homeland is sanitised for the American market, Prisoners of War, takes no prisoners. The story, characters and acting are first rate; this is drama, human drama and physiological thriller all in one. Move beyond that it is in Hebrew and you will be gripped from the first episode. But beware, the prisoners of war were tortured - and those scenes are uncomfortable and in some cases, unbearable to watch. But it goes towards understanding the reaction of the soldiers once they are released.

I would have given more stars if they were available!