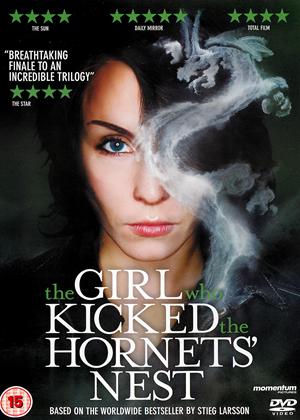 Rent other films like The Girl Who Kicked the Hornet's Nest

Reviews (4) of The Girl Who Kicked the Hornet's Nest

Another great film in this series and very sad that there will be no more, or will there...?

Noomi won't get any nominations for this one, not because she wasn't great but she just doesn't have as much to do. Mikael Blomkvist (Michael Nyqvist) is more prominent this time as he was in the first file, and a great job he does too. Enjoy!

Having seen all three of the original 'Swedish' version films, and remember that this is a Swedish Language film, all three are, this is in my opinion the best of all three. "The Girl with the Dragon Tattoo' was an interesting opening to the trilogy, featuring three main characters, in a very 'Hannibal Lector' style plot. The second, was more of the same and dragged a little. But the third really ties it all together and brings a much more heightened sense of purpose to both the acting, direction and plot. If any readers out there have ever been a victim of the incredibly corrupt legal systems that we seem to have, you will be able to empathise with the main characters and the plot as it's very close to reality. I enjoyed this third film the most. As this is a Swedish Language film, it will be interesting to see how the new Americanised versions starring Daniel Craig, the first of which is due out shortly, will handle this very european style thriller.

Persevere, and you will be rewarded by a fascinating and complex tale - The Girl Who Kicked the Hornet's Nest review by RP

After seeing – and enjoying - the first two films in the trilogy ('The Girl With The Dragon Tattoo' and 'The Girl Who Played With Fire') I've now seen this film, the last of the three. My first comment is that they really must be seen in order or else you won't be able to follow the story – essentially, they are one very long single film. My second comment is that I enjoyed them so much that I have ordered the books on which they are based.

The film ties up the loose ends from 'The Girl Who Played With Fire'. It shows Lisbeth Salander ('The Girl', played by Noomi Rapace) arrested for three murders, but recovering in hospital from her ordeal at the end of the previous film. While it is complex, it provides a satisfying ending to the trilogy as her abusive father and assorted other baddies reach a suitably sticky end, including the psychiatrist who held her captive and abused her in a mental hospital at the age of 12.

It is the acting of Noomi Rapace that makes the film 'work', and work well. The film is wordy and slow moving with intermittent violent episodes. But persevere, and you will be rewarded by a fascinating and complex tale. Highly recommended.

The Swedish-made films are the best and this is probably my favourite of the three. It has a lot of plot twists and turns and it seems to take the drama of the first two, to an altogether new height. Definbately worth watching this, and do make sure you watch it with the subtitles on, it adds so much more to the film.

‘The Girl Who Kicked the Hornet’s Nest’ is a Swedish film that takes off from ‘The Girl Who Played with Fire’ – the last in the Millennium Trilogy of films based on the late Stieg Larsson’s novels of the same name. The saga continues as Lisbeth Salander (Noomi Rapace) is being airlifted to a hospital after she was shot by her father, Alexander Zalachenko aka Zala (Georgi Staykov). Lisbeth survives and her friend Mikael Blomkvist (Michael Nyqvist), a journalist she helped on a murder cold case before is now the one helping her.

Lisbeth has been arrested and detained until her recovery so she could stand trial for the murder of her guardian, Nils Bjurman (Peter Andersson). Blomkvist has tapped his sister Annika Giannini (Annika Hallin) to be her lawyer and as they prepare for her case, finding evidence to clear Lisbeth’s name, they realize that they’re in over their heads. For some twisted reason, the Swedish authorities are hell-bent on locking Lisbeth up and silencing her forever. How can Lisbeth – a 24-year-old Goth expert hacker for a security firm – be such a threat to them?

Stieg Larsson’s antithesis for a heroine, Lisbeth Salander, is a phenomenon. Because of Noomi Rapace’s self-possessed, smart, and tough portrayal of Lisbeth from the opening salvo, ‘The Girl with the Dragon Tattoo’, she has become one of the most celebrated contemporary fictional characters to date. Lisbeth Salander will have her Hollywood reincarnation in a David Fincher film set for release this year.

There’s nothing like Lisbeth Salander: a stoic yet curious bisexual woman with a photographic memory and a huge dragon tattoo on her back in Goth punk gear who won’t take crap from anyone. In ‘The Girl Who Kicked the Hornet’s Nest’, Lisbeth may be in a hospital bed half of the time, but you see her strength, her desire to heal and to prove her accusers wrong.

The film is rife with mysteries, conspiracies, and bad guys; the thriller and crime drama aspects are played well on screen. You’d root for Lisbeth and Blomkvist to take them all down, all the way down.