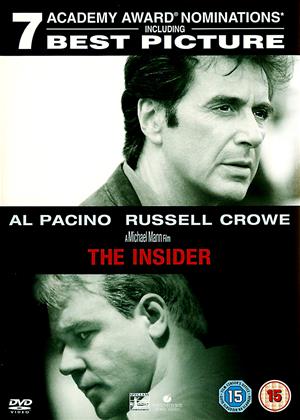 Reviews (4) of The Insider

Excellent but requires concentration - The Insider review by RP

Superb. This is a drama based on a true story, starring Al Pacino, Russell Crowe and Christopher Plummer in the lead roles. Crowe plays a research chemist employed by a tobacco company to head research into a non-carcinogenic flavour enhancer. When he tells the CEO that a non-carcinogenic substitute cannot be found, the company insists on continuing the use of the carcinogen and fires him with a substantial payment but gagging him with a confidentiality agreement. Crowe turns whistle blower – he is the insider who knows the truth that the big tobacco companies are not telling.

Al Pacino plays the role of producer of the US documentary TV show '60 Minutes' and Plummer the presenter of the show. Pacino persuades Crowe to be interviewed and tells him that he will protect his source. But Crowe's ex-employer finds out and proceeds to ruin his personal and professional life with legal proceedings and a smear campaign, not to mention death threats.

This is a long and wordy film but I found it gripping. It is the first Russell Crowe film I've seen in which he actually acts rather than simply playing Russell Crowe. Pacino plays a typically intense role, in my opinion one of his best since 'Serpico'. Plummer is excellent as the TV journalist and presenter.

The film was nominated for 7 Oscars but lost out to 'American Beauty' + Kevin Spacey, but has picked up many other awards. It really is excellent but requires concentration as it's certainly not an action thriller. 5/5 stars - highly recommended.

Exhausting - The Insider review by JD

As fiction it would be tense enough, as fact it is exhausting. The devastating effect of whistle blowing on the whistleblower is always underestimated and I for one would never have the nerve. I deeply respect those who are courageous enough to sacrifice their own safety and happiness to expose the truth, knowing that their efforts will probably be wasted. Why would we?.. probably because someone else is willing to help and support. Inspirational.

Over rated, the box office audience was right - The Insider review by Jezzer

It is easy to see why this film underperformed at the box office as it is boring and tedious. Al Pacino's character didn't have to do anywhere near the level of painstaking investigation of Woodward and Bernstein that makes All the President's Men so compelling. The story just fell into his lap. Wigand, being a wealthy, well-educated and experienced company executive, doesn't evoke the sympathy of the poor, working class mother in Erin Brockovich.

By this time in history, it was already known that tobacco companies had covered up the harm from smoking for many years previously, so Wigand's secret really seems quite trivial in comparison. There are no victim scenes to heighten the drama and give some badly needed human interest.

Russell Crowe was too young to play Wigand, who was in his fifties at the time, so they had to artificially grey his hair which looks stupid.

This is a story with unlikeable and unrelateable people who think they are more important than they are, martyring themselves over an issue that really isn't worth the sacrifice. Its high review ratings come from virtue signalling, Social Justice Warrior types who identify with this film's sense of moral superiority. It's a shame as the screenwriter Eric Roth also wrote The Good Shepherd which is one of my personal favourites.

Give this a miss and stick with All the President's Men or Erin Brockovich instead. Or treat yourself to some fictional equivalents like The Rainmaker or A Few Good Men.

Would we have the nerve? - The Insider review by AB

A film of conflicts - does the hero accept his NDA details or do the "right" thing? Given the pressure he is put under by corporate moguls I for one would simply give up or try a better method of releasing the information - dump it in the street? Send it abroad for perusal? Makes you fret for the wee people