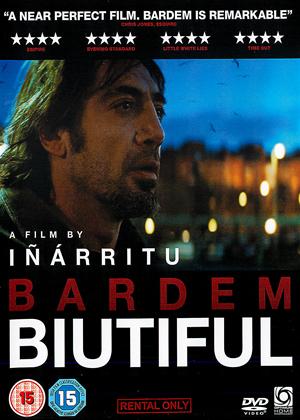 Javier Bardem gives a superb performance as Uxbal, who makes a living on the fringes of the shady underworld of Barcelona. First running a gang of street sellers (largely illegal immigrants from Senegal), peddling fake designer handbags knocked up by sweated illegal Chinese immigrants, then later selling the same cheap illegal Chinese labour to a construction company. But Uxbal learns he is dying of cancer and this colours his whole outlook on life – he attempts a reconciliation with his wife, he tries to leave a lasting legacy and memory to his children (again, superbly well played), and in one horrifying incident tries to improve the squalid conditions of the Chinese illegals. Even if you don't usually go for subtitled foreign films, let alone films with a gloomy outlook, give this one a try. 5/5 stars – one of the best films I've seen in the last year. Highly recommended.

Does a good ill - Biutiful review by JD

Strange to name a film because an unimportant spelling mistake Uxbal's daughter made during her homework. Some strange arty bits which I am still trying to work out but mainly some very rough/poor/low-life scenes about a man who is increasingly ill, separated from his manic alcoholic wife with vulnerable children and trying to do good for some illegal immigrants. This is not a glossy/comfy film. At the end of the film Javier really looks very ill. Good make up, good acting and I suspect a strict diet. A bleak and dower film, brace yourself.

A film by Alejandro Iñárritu is always worth watching, although it has to be said that, whilst this is impressively made, it is unremittingly bleak. Javier Bardem is excellent in the lead role.

Realism, 10/10. The opening credits could well have said "Based on a true story". - Biutiful review by DW

A moving depiction of a right man in a wrong world, a principled man in an unprincipled world. As my mother might have said, "The poor man couldn't do right for doing wrong." (She would never have expected to get a "name check" in a film review)!

Biutiful is a Spanish language film about a troubled father’s struggle in the final months of his life. Directed by Mexican Alejandro González Iñárritu the film takes the audience through the painful and dispersed life of Uxbal (Javier Bardem) as he attempts to understand his place in the world.

As anyone who has seen Iñárritu’s 2006 film Babel will know he has his own take on tragedy and Biutiful is no different. The sorrowful tale of the final months of Uxbal’s life is played out in a slow melee of intertwined characters and incidents, each one demonstrating the good hearted nature of the lead character.

As with any story worth telling things do not pass by uncomplicated. Uxbal is estranged from his severely depressed wife, whilst, in order to pay the bills, he has become involved in illegal immigrant trafficking. In both situations, however, Uxbal demonstrates strength of character many would lack in such positions. The film explores his sense of conscious and spirituality, focusing the story on the love between a father and his children.

Throughout the film Uxbal strives to do what is best for his children, whilst his own fathers’ premature death has left him with an emptiness in his life.

Iñárritu’s use of sound also helps to beautifully accent the emotional intensity of this movie. Both a chillingly melodic piano and almost total absence of sound are used to make you feel as though all of your senses have been overwhelmed by emotion. Visually the film contrasts a peaceful snowscape with the sunlit metropolis of Barcelona. Adding to this visual intensity the still beautiful Bardem is heartbreakingly perfect for the role. His good looks and down to earth portrayal of Uxbal do nothing but make the empathy felt for him more visceral.

Some may find the film too slow, as very little actually appears to happen throughout it’s nearly two and a half hour runtime. However the pace of the film simply adds to its sense of grace; providing the audience with enough time to fully appreciate the monumentally tragic situation facing Uxbal.