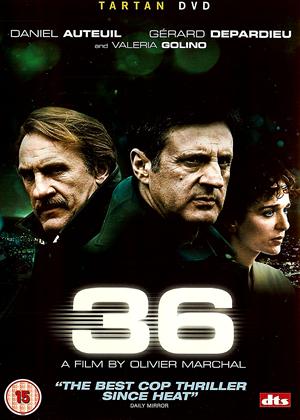 The hatred between these two detectives is awesomely acted, it is very delicately poised and utterly involving. Considering the drama of much of the plot their incredibly tense relationship remains constant and exhausting. The climax of the film (not to spoil it too much) is almost a relief. Acting doesn't get better than this.

I got completely lost with the storyline and judging by the reviews of others, obviously didn't appreciate the movie or the acting. I hired the movie because I am a great fan of Gerard Depardieu but found it to be very dark, violent in the extreme extremel and beyond my comprehension. I have given it three stars regardless as its failure to engage me possibly rests with myself.

This is a pretty dumb cop film with every move signposted and lashing of sentimentality. It has been heralded as a French ‘Heat’ which is absurd. For a start the later had an excellent director and script.

Brilliantly written story of rivalry, loyalty and revenge in the Parisian police force. Depardieu and Auteil are sensational as the two main characters and the story is absorbing. A gritty story without the formulaic Hollywood gloss. Thoroughly recommended

Superb! The best cop thriller I've seen for some time - 36 review by RP

36 Quai des Orfèvres is the Paris headquarters of the Police Judiciaire (the successor to the Sûreté, sort of like Scotland Yard, I think...).

The film deals with the rivalry between Léo Vrinks (good cop, played by Daniel Auteuil) and Denis Klein (bad cop, played by Gérard Depardieu) who each head different sections of the police. Both are hunting for an armed gang that has held up a number of armoured cars – success will lead to promotion. The good cop is motivated to catch the gang, the bad cop is motivated by the prospect of promotion, and their rivalry plays out against a dark background punctuated by violent events. Vrinks gets a lead on the gang but finds himself in a very compromising position. Klein disrupts the subsequent raid, turns in Vrinks, kills Vrinks' wife and gets the top job. Vrinks is imprisoned. On release he seeks revenge but has it performed for him, courtesy of a subplot. He is reconciled with his daughter (played by Auteuil's real life daughter) and the film ends on a relatively happy note. So it's all nicely confused, it's in French with subtitles – but it's superb! The best cop thriller I've seen for some time.

The film is written and directed by Olivier Marchal, a former police officer himself, who claims in the 'extras' interview that the story is semi-autobiographical. It is co-written by Franck Mancuso, also a former officer. The acting is excellent – both Auteuil and Depardieu are major French stars. I enjoyed the film very much: 5/5 stars. Highly recommended.