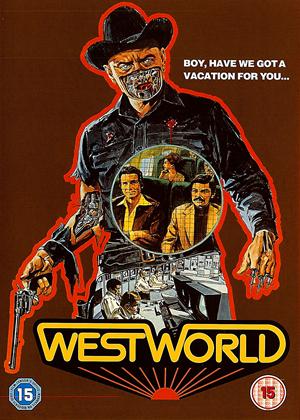 This is a classic movie from 1973 - pure 1970s. With the flares and polo-necked sweaters, the slo-mo filming, the Sam Pekinpah fake red blood and gore, the zooms to close up and the huge computers with reels of tape! Nothing ages so fast as a vision of the future. It is as 70s as movies like The Towering Inferno or The Poseidon Adventure - an utter classic of the time.

Yul Bynner is perfectly cast as a killer robot black-hatted gunslinger in is best role other than The King and I (stage and screen). Utterly fixed stare and a killer-mission walk and completely believable.

This Theme-Park-Gone-Wrong story was used by the writer and director here Michael Crichton for his novel Jurassic Park - and, interesting, the movie (not the book) also steals a 'stay still and he won't see you' scene.

The special effects may make some laugh BUT they are damn good actually and much preferable to the omnipresent CGI-fests of now which resembles computer games. This movie won the first ever Oscar for special effects, I believe, too.

I watched this as a kid in late 70s or early 80s, and remember clearly the snake scene and Yul Brynner's brilliant killer robot cowboy. That is the mark of a great iconic movie - it stays in the memory. I enjoyed it more than most movies released now, and this film is thankfully short - these days it'd be 2 and a half hours not 88 minutes - and they'd ruin it with token female and black characters, you just know it. Thankfully we have this to treasure and love.

The TV series Westworld is worth a watch and develops this idea with a more metaphysical and philosophical edge. However, for a succinct and entertaining ride, watch this.

Disaster at a futuristic theme park - Westworld review by RP

In 1993 the film 'Jurassic Park' told a tale of disaster at a futuristic theme park; it was based on a novel by Michael Crichton, who also wrote the screenplay. Michael Crichton must like the storyline, because 20 years earlier in 1973 he wrote and directed the film 'Westworld' about - guess what - disaster at a futuristic theme park. I remember seeing it at the cinema waaaaaaaay back then, and viewing it today some 40 years later it's still pretty entertaining. It tells the tale of two men who go on holiday in the Western-themed Westworld theme park, part of the virtual reality Delos holiday complex. Here they can have gunfights with impunity, because the local residents are all androids. But a computer error causes the androids to go rogue and the gunplay becomes a deadly reality. The star of the film is Yul Brynner who plays an implacable robot gunslinger. The film is spartan in its special effects, and perhaps because of this it has aged fairly well – it is clearly dated, but the story remains quite fresh even though it has been done to death in later films. I enjoyed it in 1973 and again in 2012 and rate it at 4/5 stars. Give it a try.

The ancestor of the Terminator - Westworld review by Big Bob

You can see so many influences in this film that were borrowed in later productions. Yul Brynner is fabulous as the robot gunslinger. Some of the story is a little disjointed, and the effects are of their time, but this is top notch 1970s sci-fi. If you like films such as The Stepford Wives (original), Soylent Green, et al. then you will probably enjoy this too.

This 70s science fiction film looks very dated today especially the scenes of futuristic technology but its still a remarkable idea and its influence can be found in many, often more famous, films that followed. The Terminator (1984) is an obvious one, as well as The Truman Show (1998). John Carpenter has admitted its influence in Halloween (1978) in the relentless character of Michael Myers for instance. What is interesting is Westworld's prediction that film as an entertainment will develop where the viewer becomes a participant (obviously computer gaming has almost achieved that). Set in the near future the film concerns a holiday resort called Delos which offers three amusement parks for adults where they can interact with realistic robots to recreate the 'worlds' on offer, namely Roman World, Medieval World and Westworld. The latter places the holidaymakers in a western town that represents a fairy tale/Hollwood image of the American West. The robots act as all the characters and can be shot, punched and even made love to. Two businessman John (James Brolin) and Peter (Richard Benjamin) spend a fortune on two weeks in Westworld and soon enjoy the fun of being in gunfights, bar brawls, and generally living like a cowboy in the 1880s but then the robots begin to malfunction and start to murder the guests. Peter finds he is stalked by a gunslinger robot (Yul Brynner - homaging his own character from The Magnificent Seven) and has to use his wits to defeat the advanced brain of the machine. Novelist Michael Crichton wrote and directed this and his inexperience as a director is very evident as the film is often scrappily put together (he later developed the idea of a futuristic park in his novel Jurassic Park) but it has a unique vision and has some humour and great set pieces not least the slow motion gunfights. Whether you're a fan of the recent TV series of the same name or not this film is worth checking out, it's not as deep, cerebral or as philosophical as the series but a fairly straight forward action sci-fi masquerading as a standard western and it does entertain.