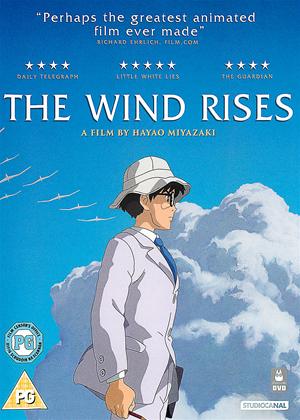 Reviews (4) of The Wind Rises

Aeronautics and fantastical machines have always played a big part in the work of Miyasaki, so I was keen to see him take on the story of a plane designer/engineer. This film is visually stunning. The level of details in backgrounds throughout the film is astounding and everything feels just right. The work which went into this must be phenomenal.

However, the story is not that interesting. The two main threads deal with the plane designs aspect and the personal life of the central character Jiro. Neither are very captivating. The backdrop of Japan between world wars is quite in interesting but not sufficiently used, and the love story features quite late and lacks inspiration. I didn't feel any attachment for any of the characters, the way I did for the graves of the fireflies, which has a similar tone.

Quite enjoyed - The Wind Rises review by BW

I quite enjoyed this one, though not as much as my Ghibli favourites like Laputa, Nausicaa, Howl, Spirited Away, Porco Rosso. There is an interesting and nicely handled, if occasionally slightly confusing, blend of fantasy and 'reality' segments in the frequently interspersed dream sequences. I did engage with the characters, though was a bit disappointed to discover later that the biographical details were largely fictional (the main character is based on a real aeronautical engineer). However, it makes for a good, if bittersweet, movie plot; and the sense of the engineer's desire to create beauty and wonder while realizing the dream of flight is palpable.

Scores more than a zero. - The Wind Rises review by SP

I am not a great fan of animated films, but this could be prejudice on my part as I have not seen that many! This thought was prompted by my first look at a Studio Ghibli product - The Wind Rises. I was totally captivated by the stunning visuals, inventive storylines and brilliant sound effects (especially in the dream sequences). I would not have believed that an animated film could be so exhilarating, moving and thought-provoking.

I especially liked the detailed links with the history of aviation and the development of pre-war Japan, although I understand that the designer of the Zero fighter - Jiro Horikoshi - had a somewhat different life story. The Zero is an iconic aircraft in Japan but, unlike the Spitfire, evokes the mixed emotions associated with defeat. As the designer laments towards the end of this film, "they never came back" (or words to that effect!).

A film has to be really good for me to give it 5 stars but this makes it easily.

I love Studio Ghibli, and especially Hiyao Miyazaki's work, and was looking forward to this film. It promised much, given his background in the world of flying (his father ran a factory that made aircraft parts for Mitsubishi), and his love for Japanese culture joined with a searching moral critique of his country’s failings, all of which combined to such powerful effect in Spirited Away. But politically, and therefore morally, this film is a cop out.

As usual with Studio Ghibli the animation is excellent and the painterly backgrounds are stunning, evoking in minute detail the world of Taisho and early Showa Japan, with its surreal mix of traditional Japanese culture and modern industrial Western influence, a society on the move. The depiction of traditional Japanese interiors and middle-class domestic life, above all in the marriage scene, is deeply beguiling. At the same time it's not hard to sympathise with his hero Jiro Horikoshi and his colleagues wanting to build a modern Japan that could hold its head up high among the western nations and not be humiliated by them.

Horikoshi’s story is a fictionalised account of the brilliant engineer whose masterpiece was the Mitsubishi Zero, the fighter plane that dominated the skies in the earlier stages of the war in the Pacific. He is depicted here as a driven yet amiable geek who is politically naïve. He has a vision of beautiful flying machines and the application, tact with colleagues, knowledge and attention to detail to make it come true. Yet, despite promptings from a mysterious German who may be a spy, he doesn’t seem to grasp his central role in the unfolding catastrophe that is Imperial Japan entering into an aggressive empire-building war and the commission of unspeakable atrocities.

The trouble is, the film doesn’t really speak openly about them, either. The only scenes of war that it shows are brief ones of Japanese bomber aircraft over China, being attacked by a Chinese fighter, and of US bombers raising a firestorm in a Japanese city as the war draws to a close. Neither are Horikoshi’s beloved Zeros. Of the rest of the war, nothing, not even a mention of Pearl Harbor.

I’m sure Miyazaki is acutely aware of this shortcoming, but feared that public opinion in his country was (still) not ready for a fuller and more honest reckoning with its past. Try to imagine a German counterpart of this, a romantic family film about, say, Wernher von Braun, the visionary designer of the V2 rocket. It’s unthinkable: the Germans have worked on their painful modern history and brought it into the open, which is how they are able to share a continent peacefully with their neighbours. Japan, it seems, still has much work to do.

It has finally arrived, the day nobody really wanted to see since the first Miyazaki film was released in 1979. The Wind Rises marks the last time legendary director Hayao Miyazaki is helming a feature film as he is heading off to what one hopes will be a happy retirement and if The Wind Rises is truly his last big feature then he will have left on an enviable high that few directors finish their stories on as The Wind Rises is one of his finest pictures he has crafted since Spirited Away and My Neighbour Totoro.

The film follows the life of Jiro Horikoshi, the designer of Japanese World War 2 fighter planes and his life leading up to his greatest achievements. The film gives viewers a look at the state of Japan in between world wars and how Jiro crafted his creations in a country that was suffering through some of its worst problems in centuries from earthquakes to the great depression and how each of these events turned him into the man he was supposed to be.

Unlike his various pictures that employed fantasy elements to tell their stories, The Wind Rises is strictly a drama, a richly designed and vivid view of Japan in an era that brought pain and suffering in its droves and yet under Miyazaki’s careful designs this Japan is one full of possibilities and the chance to triumph despite the terror befalling those around you. Jiro was lucky to see this side of Japan, not the one The Wind Rises hides behind bright colours and eternal optimism.

The film tells a powerful story and uses Japan’s history to its advantage while bringing out the best of Miyazaki films from the sense of wonder to the endless possibilities that the film alludes to. This is fine filmmaking, let alone fine animation and while it will be a considerable loss to the medium I’m glad I got to see one last masterpiece before he hung up his pencil