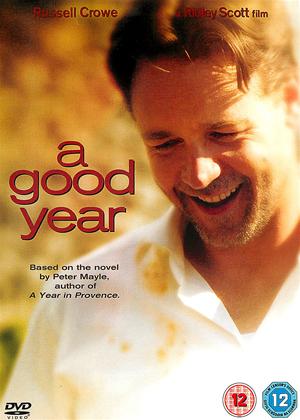 A Good Year reunites director Ridley Scott with lead actor Russell Crowe in their first collaboration since Gladiator. And could it be more different? Hardly; Rome is replaced by rural France and swords are replaced by tennis racquets.

Max Skinner is a highly successful investment banker living a financially rewarding life. But when his uncle Henry dies and bequeaths Max his entire estate including a chateau and vineyard called La Siroque in Provence he takes his first holiday from work in years and visits his boyhood summer vacationing spot, with the mercenary intention of selling it to the highest bidder.

But numerous flashbacks to his younger days (step in Freddie Highmore) when he played tennis with Uncle Henry (Albert Finney) and an interest in the local café owner (Marion Cotillard) awakens his softer side.

He’s not all bad but Russell Crowe is still far from the perfect choice to play the role of Max. He’s simply too heavyweight. After lead roles in films like Gladiator, A Beautiful Mind and Cinderella Man he’s just not suited to this sort of film, if indeed he ever was, despite what he might say about previous comedy roles. And most fatally he’s not English.

Freddie Highmore and Albert Finney are good together and add a little heart to the proceedings whilst both Marion Cotillard and Abbie Cornish are watchable if not only for their ability to add a little sexy sizzle to the otherwise rather flat proceedings.

And of course Scott makes sure that at the very least the whole thing looks fabulous. If Crowe’s performance doesn’t make you want to take a trip to France (and it most probably won’t) Scott’s cinematography will have you packing your bags and booking your flights as soon as you get home.

A Good Year is a good film, with good intentions and good performances, but it won’t be the toast of the town.

A Good year, maybe, but not a good film - A Good Year review by CP Customer

What seemed like a great little storyline in the trailer, soon turned out to be a film full of poor acting. The kind of stupidly, unamusing antics portrayed by Russell Crowe's character soon had us reaching for the coffee to keep us awake! If you REALLY don't have anything better to do on a VERY rainy afternoon, then it might be worth a watch...otherwise, forget it.

I found this film deeply irritating. Why? Well maybe it's the way it is clearly aimed at the American market so lays on thick the English and French stereotypes (it panders to the USA so much it even used the US version of 'For here's a jolly good fellow' whish in the UK has 'and so say all of us' and NOT 'which nobody can deny as used here).

Like most US films, English people are portrayed as all upper class and rich - this panders to what Americans want to see (as mercilessly milked by High Grant and directors/writers like Richard Curtis. Personally, I find it all vomit-inducing in its twee dishonesty.

It's based on the best-selling (and unashamedly elitist) books of Peter Mayle (author of A Year in Provence). So all tickety-boo middle class fantasy, basically.

France is as appallingly stereotyped as the English characters too AND OF COURSE there needs to be an American character to appeal to that market.

The central character is entirely unsympathetic - and this is laid on thick so as to make his 'redemption' more right-on and perfect in character development terms BUT it is 100% unbelievable too. I have heard of bankers changing careers like this after battles with booze or after losing money/jobs/careers/ homes BUT successful greedy pig bankers do not change their spots so easily!

Acting is fine, and one or two jokes made me laugh. Some pretty French scenery too. Best I can say of this emo-porn fantasy.

But really, only one for the hardcore fans of Ridley Scott or Russell Crowe. 1/5 stars rounded up.