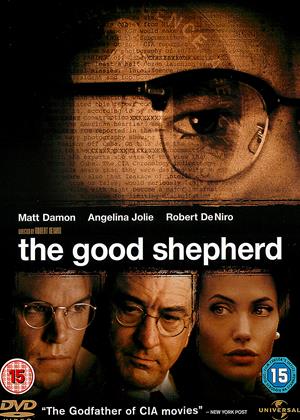 Reviews (7) of The Good Shepherd

I knew nothing about this de Niro directed movie and by the end I was asking myself who directed it, when did it come out, amazing acting and performances from Matt Damon, De Niro of course, the birth of the CIA - just one line made me shiver, 'why is CIA without a 'the'' and the reply, because you don;t have 'the' before God', which says it all, they roam the world doing what they like, it is a shocking ending, one of those films that doesn't get rave reviews anywhere and dies quietly like so many in the movie

When you look at the cast list, esp. Matt Damon you could be forgiven that a CIA chase the bad guy movie is in order. Not a chance. This film is a real slow burner and feels more like a character study of life for CIA agents - and what a life. If you concentrate hard enough it's so sad it aches. If you don't concentrate really hard, it'll confuse you easily - at one stage we couldn't work out what time period the film was in because the subtle change was in Matt Damon's glasses indicating early career or later career. Jolie stands out as the only human character, luckily for Damon his character starts off emotionless and remains so pretty much throughout the film so role possibly suited him well.

I'm divided as to whether we enjoyed this one, worthy - possibly, entertaining - not really.

I am still in a state of disbelief that a film with so many good actors and such an interesting idea could turn out to be so bad. It was really boring and the person I saw it with actually fell asleep.The best thing in it was Angelina Jolie who actually did a good job as the wife of Edward Wilson; probably one of her best acting performances. De Niro should stay in front of the camera if his forays into direction are all going to be as bad as this.

A drawn-out history of the CIA from c.1940 to c.1965 that still fascinates - The Good Shepherd review by Philip in Paradiso

This is an unusual film in some ways. It is very long (2 hrs 40 mins) and a bit slow and demonstrative; it is not an action movie at all, despite what some may expect. It is deliberative and cerebral, meticulously reconstructing the atmosphere of the late 1930s, the 1940s, the 1950s and the early 1960s primarily through the eyes of Edward Wilson (Matt Damon), a senior CIA officer. E Wilson is not a field officer: quite the opposite, he is a desk officer - the faceless bureaucrat who pulls the strings. In some ways, he is dull. In other ways, he is powerful and scary. What the film is very good at is showing what E Wilson sacrifices, in terms of his personal life and happiness, in pursuit of his mission, which is some sort of ill-defined dream that can easily turn into a nightmare.

There are some rather implausible aspects to the story: for example, E Wilson hardly ages through 30 years of intelligence work (contrary to his wife, played quite well by Angelina Jolie). The twist in the tale, at the end, is hardly plausible either (I cannot say any more to avoid spoiling any of it). The film is probably a bit too long and a bit gloomy as well as ponderous, and yet I found it utterly fascinating and it captivated me from start to finish. The intelligence community itself, in the USA, has criticized the movie for not being historically accurate, but this does not matter so much: it is, in actual fact, primarily a personal tragedy around the theme of morality and commitment, centred on an inscrutable and enigmatic Matt Damon, rather than just a historical saga about the CIA per se.

It is a complex film, with many flashbacks that can feel a bit tiresome at times: it forces you to make an effort in order to follow the plot, back and forth, but it is worth the effort. On balance, I would certainly recommend this film.

Could have been a great film. Unfortuntely it was so slow, I never felt I got into it and at 2 & 1/2 hours, I felt every second of it!Shame - disappointing

The essence of espionage, which is what this film is about, is the constant effort in keeping information from others. This should really be between the characters of the film, and not between the film and the viewers. There are many, many short scenes that leave the viewer wondering what on earth was that about, following on to subsequent scenes that just don't seem to connect to the previous one.

In many ways this is a fragmented film, confounded by the lack of dialogue or emotion from the leading character played by Matt Damon. Maybe this is how the real person was, but if you're making a film you have to get the viewer involved in understanding the leading character and this implies more information is needed in the script. Otherwise he just floats almost silently through the film.

There's a huge amount of "temporal whiplash" in the film, with scenes rapidly alternating between the 1940s and the 1960s, with a couple of them being unannounced by the onscreen graphics which led to a fair bit of confusion. It looked like the film was deliberately trying to be obtuse and keep important plot information from the viewer, this is not a new trick in films but is very tiresome if overdone, like this film is.

There are also mutterings in the dialogue that are incomprehensible. We went backwards and forwards over several phrases several times and could still not work out the words. One phrase sounded like "A tremble two stun" no matter how many times we heard it.

This could have been a good film if made well, but it turned out to be very superficial, uninvolving and in the end a waste of a couple of hours.

Glad I am not the only person who thought this was not good!

It was so boring-I'm sure that Matt Damon was just 'acting' the role how it was meant to be portrayed, but his character was lifeless, devoid of emotion, uninteresting etc etc. Robert De Niro could have saved it a little by being in it more and the only person I did like was Jolie who I don't usually rate. I didn't even really understand what on earth was going on or the whole point of the film!

Waste of an evening I'm afraid!