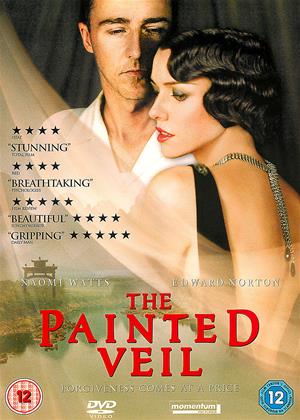 Synopsis:
Based on the novel by W. Somerset Maugham, The Painted Veil is a love story set in the 1920s that tells the story of a young English couple, Walter (Edward Norton), a middle class doctor and Kitty (Naomi Watts), an upper-class woman, who get married for the wrong reasons and relocate to Shanghai, where she falls in love with someone else. When he uncovers her infidelity, in an act of vengeance, he accepts a job in a remote village in China ravaged by a deadly epidemic, and takes her along. Their journey brings meaning to their relationship and gives them purpose in one of the most remote and beautiful places on earth.
Actors:
Naomi Watts, Edward Norton, Liev Schreiber, Catherine An, Bin Li, Bin Wu, Alan David, Marie-Laure Descoureaux, Sally Hawkins, Juliet Howland, Toby Jones, Lorraine Laurence, Gwing-Gai Lee, Li Feng, Gesang Meiduo, Yin Qing, Ian Renwick, Diana Rigg, Shihan Cheng, Liang Sijie
Directors:
John Curran
Voiced By:
Hélène Cardona
Writers:
Ron Nyswaner, W. Somerset Maugham
Studio:
Momentum
Genres:
Drama, Romance

Reviews (3) of The Painted Veil

Walter Fane, a bacteriologist, marries Kitty Garstin (Naomi Watts) and they move to China (Shanghai), where Walter has been posted to work in a government lab, studying infectious diseases. The marriage is soon in trouble, when Kitty starts an affair with a British official in Shanghai...

The film is well-made and the acting is generally good, but the film is almost too slick and too polished to feel 'real' and 'raw'. There is something missing, somehow, which prevents the movie from being a truly great film. But it is still a very good period film that I would recommend if you like that kind of historical love drama.

It is based on a very good novel by S Maugham, which I have read. What bothered me is that the dynamics of the relationship between Dr Fane and his wife have been altered in the film adaptation, and considerably so. In the movie, and without giving too much away, to a certain extent, Dr Fane is the central character, or he is at least as important as Kitty. In the novel, everything revolves around Kitty, primarily. The way that their relationship evolves is very different from what is portrayed in the film.

S Maugham is actually far more radical and much harsher in his portrayal of human nature and sentimental relationships: there are no concessions to 'good taste' and common sensitivities in the novel. The film, probably to please a wider public, drifts towards a more conventional form of romance, somehow, even though the setting is dramatic and even tragic in other ways. Ultimately, the novel's angle is more interesting than the simpler take on the characters put forward in the film. And the novel was written in the 1920s!

On balance, I would recommend the film, but I would advise you to read the book first, if you don't know it. And you will see the difference between a satisfying work of fiction (the movie) and great art (the novel).

A story of the unwise marriage of a doctor and 'woman of privilege' who was just looking to escape from her family. Their journey takes them to China to Cholera infected villages. Some amazing cinematography and convincing performances by Norton and Watts as they learn to respect each other.

I love this movie. It looks amazing with the fabulous cinematography and wonderful mountains backdrop but it's also just a great story with convincing characters. It's not overly sentimental as a romantic drama which is really refreshing and makes it feel more real. I like the 1920's China / Colonial political backdrop too as I've not seen many movies covering this !