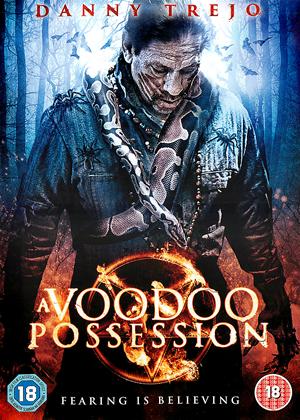 Synopsis:
Imagine an insatiable demon that feeds on blood, thrives on pain, and reaches from beyond the grave to torment the living and the dead. For believers and skeptics alike, there is nothing in this world or the next to rival the relentless evil of a Voodoo Possession. Burdened since childhood with a gnawing sense of guilt, cynical Aiden Chase journeys to a Haitian insane asylum in search of his missing brother. Upon arriving, he discovers all the inmates are seemingly possessed by a bloodthirsty voodoo spirit. Now, Aiden must abandon reality and descend into a terrifying spirit world to try to rescue his brother - or they will both be damned for eternity.
Actors:
Ama Amoafo-Yeboah, Davante Bell, Tomas Boykin, Ryan Caltagirone, Allena Cayce, Dominic Conti, Corey Deshon, Gabriele Eggerling, Treva Etienne, Lilyana Gomez, Darius Devontaye Green, Holly Haupert, Diane Henderson, David Thomas Jenkins
Directors:
Walter Boholst
Producers:
Walter Boholst, Barney Burman, Mark Burman, Douglas Wroan
Voiced By:
Duke Gator
Writers:
Walter Boholst
Studio:
Signature Entertainment
Genres:
Horror

Reviews (1) of A Voodoo Possession

One thing worse than being a patient in an understaffed, dilapidated mental hospital in Haiti is to be visited by a group of quick-talking, squabbling young hacks determined to uncover the institution’s secrets whilst dishonouring local beliefs, moaning about the lack of a Starbucks, and shoving their cameras into patients’ faces.

Hunky main man Aiden (Ryan Caltagirone) has also come here to search for his brother, and is alarmed to find the place possessed by some demonic force. Hence the film’s title. Splendid-faced Danny Trejo, who is perhaps best known for his appearances in three ‘From Dusk Till Dawn’ films (as well as a plethora of others) appears briefly as Billy Cross. Other characters are sadly so flat that they barely register.

We have to trust that the asylum is in Haiti, as everything occurs indoors and the simple sets betray the low budget on offer. “I’m having trouble processing all this crazy shit,” fey Duane Dubois (Abe Spigner) remonstrates at one stage, which gives you some idea of the level of erudition on display here – but he has a point. The story, other than an asylum possessed, is a jumble and so flat are the scares (although the climactic effects occasionally ascend to the impressive) that the effort required to work out what exactly is going on doesn’t seem worth it. Even the music score (usually a dependable way of enhancing mood) is underwhelming, all but disappearing at moments of tension.

Ultimately, this emerges as yet another badly made unengaging horror attempt with screaming passing off as emoting (with Caltagirone the main culprit): daytime soap opera drama interspersed with wailings of demonic forces. The ‘touching’ ending featuring (‘SPOILER’) the two reunited brothers sobbing and telling each other how much they love each other is particularly nauseating. Why would a supposed powerful spirit spend so much time concerning itself with this bunch of shallow show-offs is anyone’s guess.