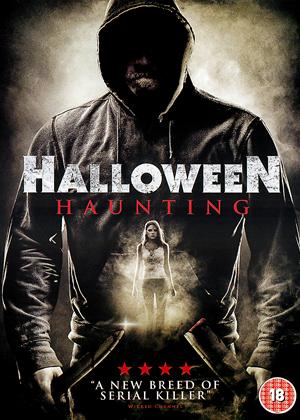 Don’t be put off by the ‘cheeky’ packaging. It features a hooded figure that could be Michael Myers (and who doesn’t appear in the film) and the ‘Halloween’ part of the title is highlighted in a familiar font. But this is nothing to do with any ‘Halloween’ series – it was originally called ‘Hayride’ and then ‘Pitchfork Murders’ before settling on its current derivative title.

Colours are quite garish, unusually for a horror – making the grass look grassier, the (CGI) rain look rainier and the blood look bloodier! Then the cutesy young couple show up making fun of creepy local superstitions. They are not obnoxious in the way teens are often portrayed as being, but as their bland, squeaky exposition continues, I look forward to the prospect of the stocky escaped ‘bat shit crazy’ killer coming for them – although as events roll on, their inoffensive simplicity is probably the most consistent thing about this story.

The Halloween Hayride takes place at the same time as the legendry killer appears to be on a killing spree. So while the young people are having a great time scaring each other, nearby a couple of policemen stumble upon a number of the killer’s victims. Do they warn the youngsters about what is happening? Not at all. This is a curious lack of logic that makes it difficult to retain interest in the goings-on.

The twist is that the person we think is the killer actually isn’t, and the heroine decides that the moment of their assailant’s death is the time to announce she is pregnant. Cue a post credits scene that reveals the killer isn’t dead after all.

Low budget films can be incredibly good. They belie a lack of resources by being unconstrained by the limitations imposed by big studios and money-men. But when the main purpose appears to be the intention of making a horror-by-numbers that has been done many times before in the last 25 years, it’s confounding.