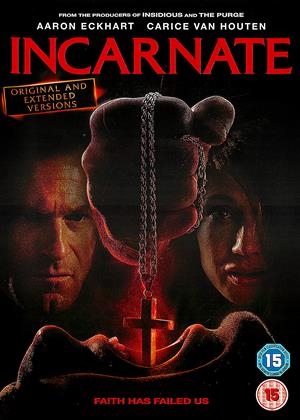 It’s strange to think that the tale of a child being possessed and in need of an exorcism has become a subgenre all it’s own. At this point, why not just make it a regular childhood ailment akin to the common cold or the flu? How many of these films have we sat through that by now we know the drill? Can’t they just become comedies or melodramas instead of being the usual bout of tedious and tired terror?

I ask only because the religious hero who comes to the rescue in this instance is the wheelchair-bound scientist Dr. Seth Ember (Aaron Eckhart). Seriously, a scientist. If getting rid of evil spirits is now a science, again, why not present a normalcy and mundanity to the experience. Think about how satirically interesting it could be to make exorcisms just a regular thing that this weary scientist has to deal with on a daily basis.

Anyway, Dr. Ember is called upon by the Vatican to investigate a single mother trying to deal with the demonic possession of her 11-year-old son (David Mazouz). Of course, Ember insists that his methods of essentially entering dreams are not that of an exorcism because in this world exorcism is not exactly a common thing. It seems much more marketable and believable to brand Ember’s dream-entering techniques as a hard science and less of a spiritual affair. Still, Ember takes on the job and we’re soon thrown into a semi-surreal investigation of one boy’s mind and flushing out demons.

Incarnate offers so little to be divergent from other exorcism pictures. The whole dream aspect just makes me think back to the earliest example in The Exorcist II and the more recent spooky-doings of the Insidious series. And at least in the Insidious movies, the ghost-hunters and dream-warriors were quirky and colorful. Echkart just seems haggard when reduced to a wheelchair and acting in a very earnest, straight, and gravely dull voice that he’s been pulling for most of his lesser films.

There’s some twisty aspects thrown into the mixture about Ember having a personal gain in this mission and there’s some family drama thrown into the mix as well about coming to terms with divorce. But on top of all that assembly is a ho-hum bag of tricks and terrors that have been overused to death, to the point where I doubt even the jumpscares would evoke a mild jolt out of the audience.

Incarnate is as forgettable as its title, sure to be confused for Insidious or perhaps even acknowledged as the Asylum take on Insidious, appearing as the lesser knock-off picture. Sadly, such a speculation is not too far off.