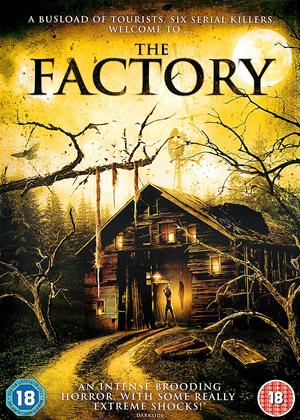 Reviews (1) of The Factory

Steven Judd directs this unnervingly odd horror film with a cast of outrageous caricatures that are laced with a certain realism. There is a sleazy bus driver, who manages to lose his passengers, a preaching evangelist, an aggressive Goth who cannot speak without pouting, a health obsessive, two brightly clad horny gum-chewing teen girls, and a possible hero Simon (Damien Puckler). We meet Simon at the beginning of the film, where, as a child, he clubs to death his abusive father before sprouting muscles and designer stubble and subtle tattoos. As the most sensible and handsome member of the ill-assorted crew, he soon becomes unelected leader of the pack. However, my favourite member is ‘Auntie May’ (Mara Hall), a larger lady who has seen-it-all-before and has a fine line in weary expletives relating either to her own, or someone else’s ass. (“Auntie May ain’t no b**** to f*** with,” she warns at one point.) There’s little that impresses Auntie May.

Because the characters are so extreme, the weird and unnerving situation they find themselves in seems strangely fitting, and as a result, deliberately stylised. They stumble upon a ghost town, which houses the ‘Death Factory’, a museum that had been run by occultists and dedicated to serial killers including Ed Gein, Jeffrey Dahmer and a lesbian Jack The Ripper (amongst others). The Goth, Ren (Jeremy Thorsen) and his girlfriend Star (Tonya Kay) find a ‘Book of the Dead’, read it, and subsequently bring the serial killers to life. In such a setting, such surreal happenings don’t seem entirely unreasonable.

After that, the narrative seems to settle into a more straightforward groove, if you can call stabbing, biting, disembowelling, and softcore sex straightforward. Gratifyingly, the resurrected serial killers will just as willingly slaughter each other as any of the ex-passengers. And the bus driver? He might well be Satan, so that’s something. The finale in particular is a terrific visual pay-off, the scope of the ensuing battle is spectacular and satisfying.

Messy this is, serious it isn’t. It certainly isn’t a comedy, but the low budget cheerfulness invites you to view it a certain way, to go with it. If you think during the opening moments, that it’s going to be a certain kind of film – like I did – you’d be wrong. This isn’t like any kind of film – and it is well worth seeing.