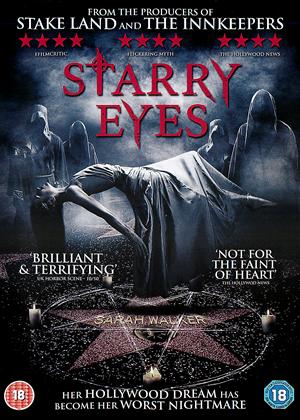 Alexandra Essoe plays Sarah, whose demure nature masks a desperation to become a successful actress. She is surrounded by snide wastrel friends, and there are moments when her ambition suggests she is probably just as contemptuous of them as they appear to be of her. After another unsuccessful audition, she is caught throwing a violent tantrum by one of the casting directors, and her outburst sparks interest. When she eventually meets the producer, things take on a mysterious and very sinister turn.

In the pivotal role of Sarah, Essoe excels at every opportunity. The viewer is lead to feel every beat of the humiliation she suffers, either at the hands of her friends, or in the job she abhors. Her transformation throughout the film is believably handled throughout, which is just as well because what happens to her is … bizarre.

The gore effects are very impressive, especially for a low-budget picture, although she does appear to barely be able to move in one scene, only to become a rabid killer in the next.

There are questions. In fact, the whole thing ends with a massive question – none of Sarah’s victims seem to be discovered, there is no evidence of any police investigation. In fact, the whole story takes place in a kind of elevated isolation where no outside influences are present. And of course, who are the people behind it all, and just what does Sarah become? ‘Starry Eyes’ results in being a highly enjoyable, gruesome picture where the journey is a lot more entertaining than the destination.

Starry Eyes holds a special place in my heart as a B-movie script with A-movie direction. It’s a telling tale of fame too costly, but coated in that oh-so-delicious 80’s gloss of small productions. The titles appear in fancy red text over black backgrounds. The music is a tense mixture of subtle synth that builds on the tension like no other genre can. The violence is brutally unforgiving and the acting is delightfully played up at just right tone of camp and class. It’s a guilty pleasure bit of horror that doesn’t feel quite so guilty for its originality and craft.

What makes the film so engaging is the intense attention given to the troubled protagonist on her descent into madness. Sarah (Alex Essoe) is portrayed as a starving actress struggling for a gig. Her day job is working as a waitress for a Hooters-esque establishment where she wears pants so tight the owner is baffled where she stashes her cell phone. At home, she faces her not-so-helpful group of friends who are all doing much better than she is. In her frustration, she has fits of pulling out her hair and strange visions of bleeding all over. Sarah is clearly unhinged by her situation and clearly needs help. What she gets instead is the chance of a lifetime when she receives a callback for a movie audition.

But something is clearly disturbed with these shrewd casting agents as she isn’t considered until she insights her insane tantrum of rage for the audition. She’s not concerned that the people she’s associating with are incredibly creepy and foreboding for casting her of all people in a horror movie entitled The Silver Scream. They want her to appear nude for several pictures at a second audition and she’s not the least bit phased. Even when the “producer” coaxes her into providing him sexual favor to allow the gates of greatness to open, she still goes along with it albeit after her initial shock. She is truly willing to do anything for the role and pushes the obvious satanic agenda to the back of her mind.

On its surface, the movie appears as a rather blunt allegory for the price of fame being too high. An actress is so desperate for work that she ends up literally selling her soul for a chance to be in a movie. It almost turns comedic with how dark it dips into the satanic realm so briskly. But you can’t help admiring its craft in conception. What essentially turns into a bit of body horror is rather unique in the way it stages Sarah’s evil path to stardom. She appears helpless at first, but soon becomes fully aware of her transformation into a monster that can both be a star and exact revenge on her “friends”. It’s brutal and uncompromising in how Sarah murders them in their sleep and guts them in hallways. I don’t think I’ve ever seen a more violent movie death involving arm weights.

What stands out the most from this small little horror film is its unique editing. I love the way Sarah dips in and out of visions as she begins to lose control of her life. A dream of her audition features her lines quickly blurring from the page as blood pools out of her nose. We know it's a dream right away, but it’s still impressive for its staging. Her transformation occurs in short bursts of your standards for body horror - hair comes out, fingernails peels off, blood pools into the toilet, maggots come out her mouth, etc. But I love how vague her process is kept from the casting crew and producer who seem rather ecstatic about her ascension into a dark rebirth. It’s that care in creation that makes this rather bleak rise of a vengeful spirit seem so much more engaging.

Starry Eyes is both fresh and familiar. It creates a stunning bit of horror that’s both tantalizing to look at and a thrill to follow for as pitch black as it becomes. I soon discovered that this project was partially funded by a Kickstarter campaign. This could certainly be the crowd-funded operation’s star example of promoting talented filmmakers. Writer/directing duo Kevin Kolsch and Dennis Widmyer are surely going to be creators to keep your eyes on in the horror genre.