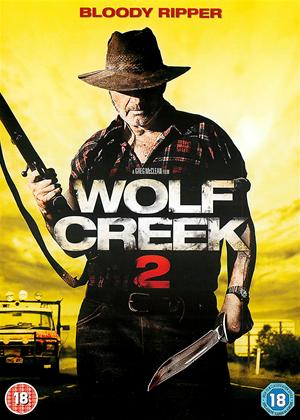 I enjoyed this Wolf Creek 2 better than the first one. It doesn't follow on from the first film so it doesn't matter if you haven't seen it. This is a very graphic horror film that will make you cringe.Story not bad but some very nasty scenes.

A nasty, violent, tense and shocking horror Wolf Creek 2 returns to the Australian outback to tell the story of crazed cannibal Mick Taylor (John Jarratt) in another feature from writer/director Greg Mclean which is sure to test your gag reflexes.

I will be upfront, this is *not* my sort of film, don’t get me wrong I like a good horror but have always found the off screen creepier than the graphic and the fantastical more terrifying than the pseudo real, however for those who enjoyed the Hostel movies and continued to get a kick out of the Saw films even after eight or nine of them then I reckon Wolf Creek 2 will be right up your street.

Though the story seems somewhat unimportant I will give you a brief outline of it nonetheless, a German tourist couple hitch hike out into the beautiful but vast Aussie outback and find themselves stranded, unable to catch a ride back to civilization; setting up camp for the night they assure themselves they have nothing to fear. When they are awoken by a concerned stranger in the night however they are told that there are dangerous things that live in the crater on Wolfe Creek. What they do not know however is that the most deadly predator is the seemingly kind stranger, Mick Taylor.

I will give Jarratt his dues, he is incredibly menacing as the cannibal Taylor, looming over both his victims and the camera alike, pursuing his prey in a ferocious and determined manner, it’s enough to put anyone off camping for a while at least.

If you like your horror bloody, your chases intense and your demons in human form then Wolf Creek 2 will give you everything you desire, if you like things a little more subtle then I would suggest you steer clear.