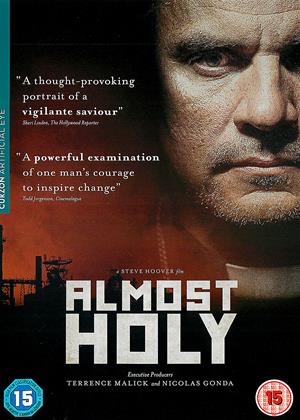 Synopsis:
Gennadiy Mokhnenko is a pastor and a vigilante. For most of his career he has made a habit of trawling the streets of Ukraine and forcibly kidnapping children in drug dens who are addicted to the narcotics. Often against their will, he looks after the children, weening them off the drugs in an effort to give them a chance for a happier and more stable life. But whilst Gennadiy's intentions may be noble his methods are often brought into question by the public and it is this moral ambiguity and the debate around it that informs most of his life.
Actors:
Gennadiy Mokhnenko
Directors:
Steve Hoover
Producers:
Danny Yourd
Writers:
Steve Hoover
Aka:
Crocodile Gennadiy
Studio:
Curzon / Artificial Eye
Genres:
Documentary, Special Interest
Countries:
Ukraine, Documentary, Special Interest

Almost Holy follows Gennadiy Mokhnenko – a godlike figure who has taken an oath to protect homeless children in Ukraine by all means possible, thus earning the nickname “Crocodile” Gennadiy. Meanwhile, his cause justifies his means which are, let’s say not very conventional in the overall meaning of the word. His charisma and uniqueness of character drives this documentary further than anything I’ve seen before in the genre, and it does so well that it propels Gennadiy Mokhnenko to an apotheosis true to his character and wit.

Almost Holy by director Steve Hoover, by a large stretch of a margin - is probably the best documentary I’ve recently seen.

The film contains imagery that is not for the easily squeamish, nor the faint of heart. As we follow Mokhnenko in his modern holy campaign to purify evil from the world (in what he deeply puts his faith in), the Ukrainian ghetto and forgotten slums impose on us like vultures over a wounded animal. And within those slums live children who, given their current circumstances, reach for drugs and violence as means for coping and surviving the harsh conditions they find themselves in.

Gennadiy Mokhnenko walks a fine line between humanity and vigilance, as his methods are nowhere near what other priests would do, even encourage. But, given his physique and energy, one almost thinks that following the crowd would prove as a cardinal sin for our pastor of the streets. To bring the best of others, he must unleash the worst from within.

Furthermore, Almost Holy’s plot feels as if scenes from fiction writing were nabbed and crammed altogether into the film. Some of them are so unbelievable and stranger than fiction that one feels like slowly departing logic and entering the twilight zone. Let alone those same scenes to be featured in a documentary film of this caliber?

The film’s structure, paired with an eerily motivational electronic score done by music veteran Atticus Ross, conjures an atmosphere to be remembered for days to come. Its editing and cutting is a mandatory course which most Hollywood directors should take regardless of their time spent in the industry (eyeing you Bay!). The film’s aesthetics are laid bare in a fashion that elicits empathy both for those affected by such circumstances, and the pastor Crocodile Gennadiy’s unconventional means of righting wrongs and putting an end to Ukraine’s poverty – the hard way.

So, do Gennadiy’s ends justify his means? According to him – yes. Others would deem such actions unacceptable (taking drug addicted kids and ‘rehabilitating’ them in a center that becomes questionable as each day goes by), or even downright illegal. Gennadiy Mokhnenko doesn’t care: he is a man on a mission and would do anything to fulfill his prophecy.

Almost Holy shows the audience a cult personality in the making; as Crocodile Gennadiy roams the streets of Mariupol in Ukraine and ‘baptizes’ children his own way – larger things start lurking and threaten his legacy in unforeseeable ways.