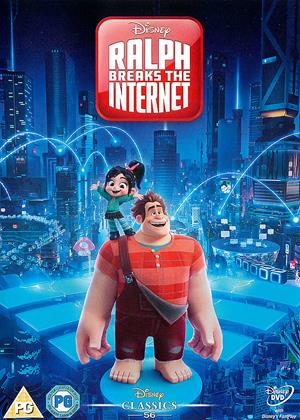 Reviews (5) of Ralph Breaks the Internet

Fun follow up film, easy to watch with my 6 year and 10 year old boys !

Wasn`t too long either.

I hated this movie, the first half hour I saw of it before I could not take any more.

I am wondering why I hated it so much. Was it the obvious product placement - of eBay and most online companies EXCEPT GOOGLE, noted? Basically this is ONE big advert pushing online companies and computer games at kids.

Or was it the awfully pc 'woke' casting - hardly any white males at all; Lots of girly racing drivers behaving like boys though. And the usually large ethnic percentage of Hollywood dross these days. Nothing against diverse casting BUT WHEN white males are UNDER-REPRESENTED deliberately to a massive extent, then yes, I CALL OUT that as the racism and sexism it is.

Or was it the violence and crudeness? In a kids' film I do not expect characters to push and shove and hit each other, or be so crude in behaviour - just disgusting.

Or maybe it was the poor 2-D animation and stupid unfunny 'jokes' and uninteresting characters.

One star, if that. AWFUL.

A film about allowing friends to move on without suffocating them. A bit heavy? Well it is all done in typical bright lights and whistles and tongue in cheek humour. Delightful nonsense while sending up the studios many franchise and the internet. Nicely paced for kids and adults with plenty going on. Thought it was one of the better recent Disney Films which was a delight and a surprise.

Decent, but not as good as the first one - Ralph Breaks the Internet review by MM

As an animated parody of internet culture and other Disney princess stories, this film is certainly entertaining, with plenty of easter eggs and meme references that only the adults will get. Plotwise, it's a little weak compared to the first one. I've no problem with making Ralph a big-hearted softie — the first movie already established that he "doesn't want to be the bad guy" but tends to mess things up regardless — but the story shouldn't JUST be about his feelings. The voice acting is pretty good (I liked that almost all of the princesses were voiced by their actual actors, although it's probably not too hard to pull off if you're Disney), but I felt that Sarah Silverman takes the "chipmunk voice" a little too far this time.

I didn't watch this film but my boys did and here's what they said. It was ok, abit boring, the story was all over the place. Not as good as the first one. So from that review, I'd say don't bother.

The sequel to Wreck-It Ralph expands the world even if it forgets to expand the characters right along with it. It blows up the video landscape to the Internet with endless new sights to marvel and references to gobble like Pac-Man dots. Despite missing out on the bigger heart I knew the movie had, Ralph Breaks The Internet still serves up another piping hot and biting adventure that takes dead aim at Disney as no other property does.

All is well in the arcade of which Ralph (John C. Reilly) resides as the villain of Fix-It Felix. Everything is in harmony and nobody feels left out. But the glitched racer Vanellope von Schweetz (Sarah Silverman) finds herself bored by her game of the candy-themed racer Sugar Rush. She wants more and fears the same old thing at the arcade that Ralph loves so much threatens their friendship. But Ralph tries to do the right thing. And in doing so, breaks her game. The only way to save Sugar Rush now is to venture to the Internet for a crucial part to save the arcade cabinet.

Does this Internet venturing sound familiar? TRON, yes, is an obvious reference, considering the film does bring up this movie and the arcade game. But what seemed to be a fearful relation was to last year’s The Emoji Movie, a film without effort in crafting a story around online applications. What silly concerns! How anyone could equate Sony’s shoddy method of storytelling to the Walt Disney Animation Studio’s grand world building of Big Hero 6 and Zootopia is beyond me. That’s like saying a fancy French restaurant's upcoming steak will be little more than Applebee’s with a French sauce. And returning director Rich Moore serves up all fixings we’ve come to expect from the detailed and dazzling world of digital characters and their worlds.

As such, Ralph and Vanellope meet many unique characters on their Internet travels. I especially dug the bookwormish Internet search coordinator voiced by Alan Tudyk, quick to autocorrect any sentence started. Taraji P. Henson voices a viral video manager, decked out in fancy shades and jackets, aiming to make Ralph the next viral star of the Internet. Of course, Ralph isn’t interested in leaving his arcade life, only doing the viral videos for saving Sugar Rush. Vanellope, however, is having second thoughts when she ventures into an online street racer game. She is wowed by the open environment and astounded by the trick-touting racer Shank (voiced by Gal Gadot). Will Vanellope stay or go back to her home?

Rich Moore brings his usual bag of clever tricks he’s been mastering since his time on The Simpsons, loading the picture up with gags as smart as they are referential. It rarely feels like Moore is just slapping together Internet buzzwords, including incorporating such elements as viruses and DDoS attacks. As with the last film, there are also some great Easter eggs stored in the background, my favorite being a girder of Geocities in the relics on the old Internet world.

Coupled with the abundant satirizing of the familiar Disney tropes, Ralph Breaks The Internet has a lot of fun even if it does lack some its loftier character ambitions. There’s a great dynamic between Ralph and Vanellope coming to terms with their relationship that even though we don’t focus too much on this aspect, it does lead to a surprising tearjerker of an ending. The film also misses out on a great adoption subplot with the other characters but, again, it still pays off in the end. While the film does get a bit lost in its own little universe, it’s such an irreverent pleasure of a trip I didn’t mind if the filmmakers couldn’t slow down to smell the digital roses.