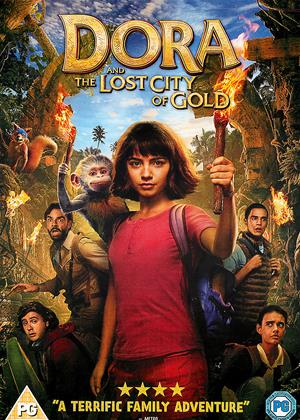 Rent other films like Dora and the Lost City of Gold

Reviews (2) of Dora and the Lost City of Gold

Though slightly long, this is good family adventure with some enjoyable references to the original cartoon.

A good if average family film, great for the Kids! - Dora and the Lost City of Gold review by CS

Not quite what I was expecting, this is more or less a kids version of Raiders of the Lost Ark etc, with a bit of all those other classic explorer movies thrown in for good measure. Lighthearted and good humoured, this has nothing new or different to offer the genre, but it is an enjoyable and fun family film, great for kids and young adults.  Dora of course being taken from the animated series, 'Dora the Explorer', most of the cast appear to be South American and I didn't recognise any of the faces. This for me came across as a made for TV Movie, in a similar vein to all those Nickleodian or Disney movies aimed at children and young adults. I think the title says it all really, nothing new, nothing special, just a god fun family movie for a lazy Sunday afternoon!

The live-action Dora movie is strange for a number of reasons. It attempts to adapt it an iconic preschool animated icon into live-action, along with all the eccentricities of the title character’s method of audience participation. It scales up to the character to a plucky teen that is thrown out of her element into a fish-out-of-water comedy for at least a portion of the film. It also features computer-generated animals, some talk and some don’t. Also, Dora gets high.

This is such a strange film that I didn’t expect to blindside me with its knowing jabs at the character and a Paddington level of charming energy. Isabela Moner plays Dora as a wide-eyed and always cheerful girl of the jungle. Even though she had to say goodbye to her cousin Diego at such a young age when he left for the city, she remained the same imaginative and musical girl she was as a kid. In short, she didn’t grow up and didn’t exactly grow up out of her Dora-ness, though her fourth-wall-breaking syndrome seems to have subsided. When Dora comes of age, her parents, fearing for her safety as they near the discovery of an ancient civilization, send off her to live in California with Diego.

My skin started to crawl a bit when realizing this may be the whole picture as a sort of female equal of Jungle 2 Jungle, where Dora grins and stumbles her way through suburb life like a perky princess in a garbage dump. But before the film ever fully settles on this type of story which has been echoed in far too many TV-to-movie adaptations of the 1990s, Dora quickly finds herself and her new suburb friends whisked back to the jungle for an adventure of escaping greedy bad guys, angry tribes, and discovering a lost Inca city. Now it’s less about Dora trying to figure out smartphones and more about her teaching her friends how not to drown in quicksand.

The adventure itself is fairly standard for a kids movie, complete with tomb puzzles, daring dashes through the jungle, and using each teenager’s strengths to save the day. Where the film becomes a surreal experience for the older crowd is how it plays with the format of Dora. Remember how Dora would sing songs about going on adventures? Now she sings about digging holes in the jungle to poop in. Remember how she would ask the audience to repeat what she says? Now she does it for the illness brought on by poisonous frogs. Remember how every episode with end with her singing the “We Did It” song? She reprises that song but this time with lyrics about rashes and diseases gained on her journey.

Perhaps the most perplexing aspect of the film is its unaddressed insanity. Swiper the talking fox is an outlaw that steals and is apparently somewhat accepted in this universe. Yet the monkey Boots is not accepted as a talking animal, with the exception of one sequence where Dora can hear him in what may or may not be a hallucination. I’m not ruling out Dora tripping on drugs because there is a scene where her friends inhale spores from a flower and become high while seeing animated versions of themselves.

Dora and The Lost City of Gold may have a generic title but it manages to be a memorable experience if not for the weirdness of its assembly than for the chipper performances. Moner really sells the role so that a film which features talk of poop and mating is a little easier to enjoy with the absence of insincerity. It’s not exactly a stellar adventure but I’ll never forget the film where Dora got high and watched two scorpions mate on the head of her traveling companion.