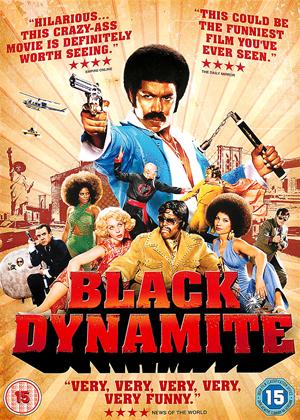 In an age proliferated with so many ‘pastiche’ and comedy versions of genuine films an genres a lot of film-goers might feel they will never laugh at another ‘satire’ again. Airplane! started it all with a spot-on, occasional miss, ‘zany’ comedy riffing on many films and genres. Then the goose that laid the golden egg was not only slaughtered but minced, fried and feed to ravenous pigs. Most of us have hardly laughed since at the hilarious ‘take-offs’.

Black Dynamite directed by Scott Sanders, albeit from nine-years ago, gets all of this back on track with loving, spot-on and hilarious tribute the glorious Blaxploitation phenomena of the seventies.

It is clear to see on the screen how much Sanders and his collaborators loves and admires those at times preposterous films. It is all there, this is not mean-spirited in the fun, whilst taking the proverbial throughout this is a film that loves its source.

The boom mike makes a deliberate appearance during the shoot as it did so often in the 70s and with the perfectly shoot zoomed-in close-ups followed by the over-exaggarated facial expressions at times you would have thought you were watching a product of the 70s such is the skill and dedication shown in the making.

The film takes place in the 1970s, using the wild and somewhat strange fashions, all cranked up to ‘eleven’ and then it sirs in the language, slang, of the era adding in the low-budget errors, miscues and continuity errors, including a character hitting his head against the boom mike. My favourite was the stuntman who was replaced during a take after getting punched for real during a stunt fight. This is all framed with shaky close-ups, exposition in song, supporting actors appear out of nowhere the list is extensive and on the whole accurate.

The script by Michael Jai White, Byron Minns and Scott Sanders is pin-point accurate and is played entirely straight by the cast of (stalwart) supporting cast.

Black Dynamite is an underappreciated spot-on parody of a cheesy but needless to say important genre of films from the 70s.