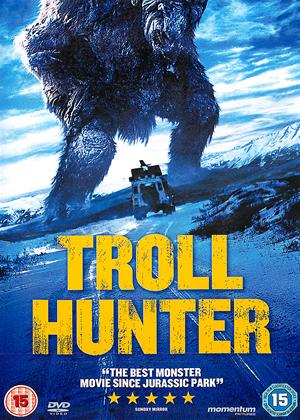 Such a great movie, absolutely love it!!!

Presented as a "found footage" film of some students investigating some weird events but things turn from odd to the stuff of folklore.

Without giving away anything as it's in the title they end up hunting trolls.

One of my favourite found footage films, awesome stuff.

This Norwegian film could pass for the bargain bin at the video store but ‘Troll Hunter (Trolljegeren)’ is the little movie that could – blow your brains out!

‘Troll Hunter’ tells the story of three students – the leader Thomas (Glenn Erland), the camera guy Kalle (Thomas Alf Larsen), and only female in the group Johanna (Johanna Mørck) – on a trek into the woods in Norway, investigating the rise of bear attacks. They just happen to bring a camera. While there, they meet a not-so-menacing man who prowls the area, thinking he’s a bear poacher. It turns out he is the titular character Troll Hunter, played by Norway’s famous comedian Otto Jespersen. At first, the amateur film makers are doubtful of this stranger but soon enough, they discover that the he tells the truth and nothing but the truth – that trolls live among us and it’s only him that stands in the way or the trolls are ready to take over!

Directed by former TV commercial director André Øvredal, his first feature film is a found footage-documentary-horror hybrid that will entertain, scare, and impress viewers. How so? Even with the low-budget and B-movie feel, it more than makes up with plot, characterization, and visual and sound effects. The ingenious way it presents folkloric trolls and it making sense should be lauded. It’s as convincing as the story of ‘Jurassic Park’.

Another great thing about the film is that the actors on camera mostly improvised their dialogue, giving it a more natural, relaxed, and even surprisingly endearing quality than most found footage films don’t have.

Mockumentaries would incite laughter – ‘Troll Hunter’ covers this and more. You’re drawn in. You’re made to believe in the existence of trolls. You’re going to be afraid of trolls from this point on. How many low-budget docu-style movies can you say has and can do that? Film gives the creature feature genre a modern tweak but not forgetting its classic edge. Trolls have been relegated to funny-looking, towering idiots that can easily be fooled and fought with. ‘Troll Hunter’ changes that, BIG time.