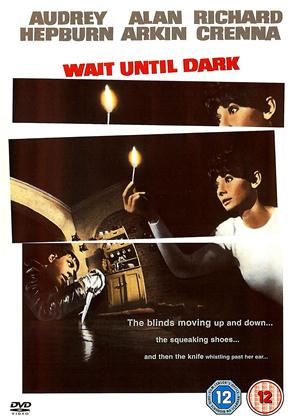 Reviews (3) of Wait Until Dark

Terence Young, best known for directing the first, second and fourth Bond movies, here tries his hand at a claustrophobic cat-and-mouse suspense thriller. It's obviously a deliberate move away from the sprawling excesses of Bond, but maybe he went too far in the opposite direction, because at times it feels like a stage play. In fact, so much of it takes place in one small open-plan apartment that I was surprised to find it wasn't adapted from a play.

The basic premise - a blind woman unknowingly has a valuable Macguffin stashed in her apartment, and ruthless criminals take advantage of her disability in an attempt to recover it - is ingenious, but it isn't handled as well as it might have been, and some of the plot points feel very contrived indeed. In particular, the absurdly over-elaborate ruse the villains employ to convince her to cooperate with them seems less like something real people would actually do than something a director would do if he was trying to remake "The Ladykillers" without the laughs mashed up with "The Night of the Hunter" without the cross-country chase, and with huge nods to "Peeping Tom", "Lady in a Cage", and probably a few other films I've forgotten about. There's also rather a lot of talk that exists purely to spin out a plot where for most of the movie the bad guys know almost exactly where the Macguffin is, and the protagonist is trying her best to give it to them because she doesn't have any reason not to, but she's temporarily mislaid it. If the villains had done nothing at all, they'd have gotten their precious doll back in a day or two!

When it works, it works very well indeed. The final scenes, where Alan Arkin really gets down to being as vile as we've known from the start he is, and Audrey Hepburn turns out to be less of a pushover than he thought, have the intensity of an A-list classic horror film. Unfortunately, there's a whole lot of mawkish padding about poor helpless Audrey Hepburn (who, by the way, looks pretty good for somebody who supposedly lost her eyesight in a car-crash that set her face on fire!) learning to adjust to her condition, when a woman blind from birth would have just as much trouble coping with a gang of murderous criminals and a lot less self-pity. And it's an equally bad mistake to have her character half-convinced that the terrible things the baddies say about her husband are true, while wasting any suspense this might have created by telling the audience from the get-go that it's all lies. Hitchcock would have left left us in doubt for at least three-quarters of the film, and quite right too!

But its most ironic flaw is a bad case of Hannibal Lecter Syndrome - a villain whose scenes are the parts of the film that really stick in everybody's memories, but whose screen-time is surprisingly brief. The actual male lead is Richard Crenna, a charming sleazeball who co-stars in three-quarters of the movie, but still gets blown off the screen by Arkin's handful of scenes. It almost plays like a short film about a blind lady menaced by a terrifying psycho, into the middle of which a full-length feature about the same lady suffering less traumatic harassment from some other guys who aren't anywhere near as scary has been unwisely inserted. I wish Young had cut back on the sentiment and made it full-on mystery-suspense-horror from start to finish. He might have given "Psycho" a run for its money as he apparently intended to, instead of making the occasionally brilliant but very patchy film we ended up with.

I enjoyed Wait Until Dark but it wasn't quite the classic I was expecting. This was based on a stage play and the movie has that same sort of feel. It's set in one room with five characters and the film at times does feel very much like a stage play. However, the actors are terrific and Audrey Hepburn gives a tour de force performance as the blind woman in peril.

Has its moments - Wait Until Dark review by RM

Alan Arkin gives a great performance as a psychopathic criminal on the hunt for a doll stuffed with drugs. A simplistic plot used before in various guises, the gimmick here is that a blind woman played by Audrey Hepburn is the victim of circumstance after her husband after being handed the doll at an airport takes it home and loses it. The film is slow to take off and suffers from too much dialogue in places. However the ending is worth the wait and one scene made me jump out of my seat. Not a bad movie but could have been better.