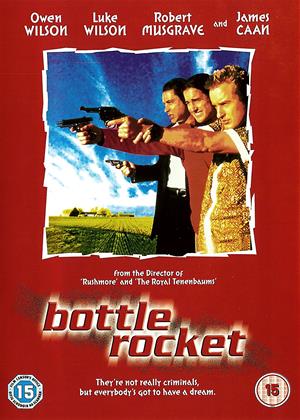 Imagine how "Reservoir Dogs" would have played out if the protagonists had been the cast of "Slackers", and you'll get the general idea of what goes on in "Bottle Rocket". Three rather pleasant and utterly clueless young men attempt to pull off an armed robbery for reasons which have absolutely nothing to do with the reality of serious crime, or indeed any other aspect of reality. It is not a spoiler to reveal that the big heist they spend most of the film working their way up to doesn't go too well, because it was never under any conceivable circumstances going to, and watching the robbery fall apart in every way you can imagine and then some is a lot of fun.

Unfortunately the journey to that point is a bit slow and meandering. The amiably feckless hero's romance with an immigrant girl who doesn't speak English aided by an increasingly embarrassed translator, the gulf between his fantasy-prone best buddy's vision of himself as a criminal mastermind and the obvious reality of the situation, and the all-round inability of any of them to do anything entirely successfully raise lots of smiles but are very seldom laugh-out-loud funny. And since this was Wes Anderson's first feature and his budget was limited, his trademark style of pausing the action to let us soak up the detail isn't as effective as it later became, since it's not the Grand Budapest Hotel in the background, just some crappy motel in Nowheresville, New Mexico.

However, he's already proficient with his other trademark directorial flourish of giving all his characters, even very minor ones, as much personality as he possibly can. James Caan deserves a special mention in this respect, although he makes barely more than a cameo appearance, as the gleefully amoral small-time crook who is nevertheless the only person in the entire film who knows what he's doing, and effortlessly conveys what an ill-advised idea it is for these naïve wasters to trust him any further than they could throw a diplodocus. Then again, this lot could probably have been outfoxed by an actual fox.

Fun in a gentle way, and very engaging if you don't mind some slow patches. Worth seeing as an early work from a director still developing his extremely distinctive style, but already showing promise of greater things.