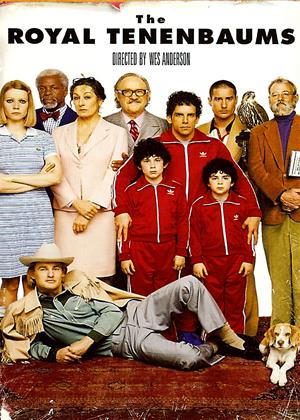 Reviews (2) of The Royal Tenenbaums

Either you like Wes Anderson movies (this, The Life Aquatic, Darjeeling Ltd etc), or you don't. In my opinion his movies have such a unique voice and sense of humour - kind of funny but tinged with strangeness and sorrow - that you need to be in the mood for them, and the Tenenbaums is no exception. However, once you've been introduced to the Tenenbaums - surely the poster family for all brilliant but deeply dysfunctional households - it is most unlikely that you will ever forget them. And the style of the characters surely has potential to spawn cult followings for years to come. Give it a go when you're feeling a little weird.

It's a Wonderful Life...? - The Royal Tenenbaums review by Count Otto Black

The good thing about Wes Anderson is his extraordinary attention to detail. As soon as he could attract decent budgets, he started going further than any other filmmaker ever in his quest to fulfill the Prime Directive of "Show, Don't Tell", to the extent that, as in this film, he'll build a set and hire an actor to stand in it gazing into the lens for the length of time it takes their character's name to be spoken during a bit of narration about somebody's past which happens to mention people who are completely irrelevant to the plot and don't otherwise appear in the film. Basically he's good at word-building.

The downside is that the people in his worlds are sometimes little more than a collection of very specific quirky tics without enough true personality for us to actually care about them. Thus he's one of those critically acclaimed directors whose films are original and in many ways dazzling inventive, and yet they don't achieve popular success because most of the audience aren't having quite as much fun as they should.

This odd story of a thoroughly disfunctional family who finally reunite under bizarre circumstances has a fascinatingly detailed crust which doesn't entirely succeed in concealing the hollow centre. Any director who seems to be concentrating on character acting, yet grossly underuses Bill Murray and Anjelica Huston at the expense of Ben Stiller and Gwyneth Paltrow, is still learning his craft! We're supposed to care about characters who would in reality have horrible or non-existent personalities just because they're kooky, and utterly inexcusable or at best deeply selfish acts or attitudes are almost instantly forgiven because the person involved suddenly learnt their lesson and/or knows how to have a good time. Seriously, encouraging young children to attend dogfights (the one thing in this movie Wes Anderson breaks his rule about showing because it would be horrible to the point of getting the film automatically banned in the UK) is not "cute" just because the characters are all laughing!

This could have a masterpiece if it had been darker. Unfortunately, having set up these people as disturbingly yet fascinatingly flawed, the much more interesting first half descends into something very close to schmaltz as the film progresses, and all ends well in an oh-so-American artificially life-affirming conclusion of the kind that wins Oscars for Best Original Screenplay (which this movie did). I think we'll see the best work from this director if (unlike Terry Gilliam) he ever fully understands that his unique visual style could equally well be applied to scripts not quite so concerned with his personal obsessions in the belief that everybody else will care about these things as much as he does.