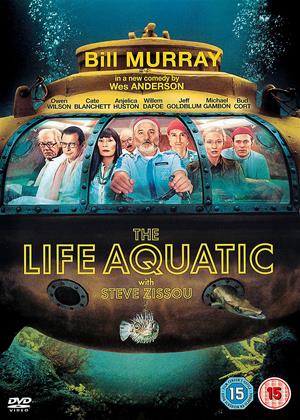 Rent other films like The Life Aquatic with Steve Zissou

Reviews (7) of The Life Aquatic with Steve Zissou

A bit of a disappointment. - The Life Aquatic with Steve Zissou review by CP Customer

I'm a big fan of Wes Anderson, with both 'Rushmore' and 'The Royal Tenenbaums' amongst my favourite films of all time, but I have to admit to finding 'The Life Aquatic' a bit of a disappointment. Although for the most part Wes Anderson films are more about the characters than the story in which they exist, story wise this was too bland, with some pretty dull dialogue and relying too heavily on the quirkiness of the characters, and at two hours long the film could have easily lost 30 minutes. Overall, if you're Wes Anderson fan then you'll want to see it, but if you're new to Wes Anderson's films I would give this a miss and rent 'Rushmore' instead.

A side slap and Jacque and the under water films.

But not many laughs, a tongue in cheek film, as opposed to LoL one.

Had heard a lot about this but it came across as totally self-indulgent rubbish. With this cast you'd think it would be good. Afraid not - we had to switch it off out of total boredom. If it was possible to give 0 out of 5, this would get it.

Amazing - The Life Aquatic with Steve Zissou review by WS

I'm a bit surprised at the negative reviews of others. I loved this film and have watched it several times, and would list it as one of my favorites.

This film is brilliant. There are two American directors who i have taken a real interest in. Wesw Anderson is one of them. Some people do not like his style of film making, i love it. If you liked Rushmore, if you liked The Royal Tenembaum's, this film is for you. If you didn't, maybe steer clear.

The film follows Steve Zissou, a documentary film-maker, avenging the life of his colleague who was eaten by a mysterious multi-coloured shark. There are a catalogue of great characters characters, one of which (Owen Wilson) is thought to be, although probably isn't, Steve's son. Plus a soundtrack, by Sea Jorge, of Bowie songs translated into Portuguese,

I have now watched this film numerous times and it is one that requires repeated viewings to fully appreciate how good it is. Having said that I find myself being drawn back to it time and time again. This is a must for any Wes Anderson fan and in my opinion his best work. Bill Murray is at his best with great support from Owen Wilson and Willem Dafoe. The humour is very subtle and perhaps a little offbeat so if you like that sort of thing this is one for you. The film may seem a little slow paced to some but I feel this is down to giving you the chance to really get to know the characters. All in all i great , amusing film.

Marmite - The Life Aquatic with Steve Zissou review by JD

Judging from the previous 6 reviews this is a Marmite film. Personally I found it self-indulgent and feeble. The impression is that the actors are deliberately portraying amateur / ham acting characters for humorous effect. Within the film are films which are even more amateur in style. The heavy weight presence of Michael Gambon and Cate Blanchett must have made this an expensive waste of talent. Goldblum, Wilson and Murray are, in my opinion, extremely over-rated, Murray in particular in this case is exposed for his lack of acting skill. Gambon has a minor role, but Blanchett could not, on her own, pull this out of the pit of desperately childish, pitiful, titillation. This might have been cutting edge cult humour if it had been made in the 60's but we expect a lot more now.