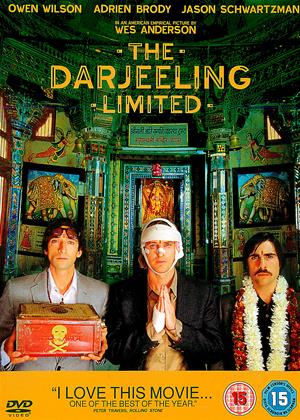 Reviews (7) of The Darjeeling Limited

Fantastically captures the spirit of India with a heartwarming tale. - The Darjeeling Limited review by CP Customer

This is one film which you will think,

"Yeah that was alright."

Yet the more you think about it, the more you'll love it. I think you'll want to watch it again and again.

A heartwarming tale of family relationships which everyone can relate to. It pulls no punches. I'm sure everyone can identify characters in their own families.

At the end of the day, it's the story that counts-not all the multi-million special effects and this story is fantastic.

If you have been to India the film will given more depth as you'll identify with the exceptional way it is captured.

This one lost me early on! - The Darjeeling Limited review by CP Customer

A bizarre small film, featuring one of the protagonists, preceded the main event - was it supposed to be clever, amusing or just scene setting?

The film was just trying too hard to be quirky, different and implausible to be funny. Owen Wilson seemed thoroughly uncomfortable [and I don't just mean the bandages]- I had the feeling he didn't get it either!

Another disappointment. - The Darjeeling Limited review by CP Customer

I'm a fan of Wes Anderson's early films like 'Bottle Rocket', 'Rushmore' and 'The Royal Tenenbaums' but this is yet another disappointing effort. It sticks the Anderson's well worn formula of quirky characters in quirky situations speaking quirky dialogue, but the entire film lacks any kind of spark. If you're a die hard fan of Wes Anderson it's worth a rental otherwise I would give it a miss.

Snakes on a Train! - The Darjeeling Limited review by Count Otto Black

I suppose I should give this pretentious mess an extra star or two because, like everything Wes Anderson does, it looks absolutely gorgeous. But this is Anderson at his very worst. It resembles the kind of film an extraterrestrial might make after hearing from a visiting Earthman about strange and exciting new concepts such as "plot", "characterization", and "humour", but before really grasping what they mean.

A totally unlikeable self-centered dimwit persuades his two almost equally annoying estranged brothers to travel with him across India on a "spiritual pilgrimage" to bring the family back together again. These idiots, each of whom consists of a one-dimensional bundle of repetitive catch-phrases and tics, irritate each other, everybody else on the train, and the audience, constantly doing stupidly irrational things which Wes Anderson seems to believe are endearingly zany. His approach to comedy in this film is downright baffling. For example: one brother buys a live cobra for no reason at all. He knows it's lethally dangerous, but he buys it anyway, and the others don't object, or even comment. He then keeps it in a small container that looks about as secure as a shoe-box, and has a large skull and crossbones painted on it to constantly remind us whenever it's in shot that there's a LIVE COBRA inside! It escapes. Much hilarity ensues. Well, a very small amount. Oops, did I spoil a totally unexpected punch-line by revealing that the cobra escapes?

Likewise, the plot is a hopeless muddle. The "spiritual pilgrimage" is constantly talked about but fizzles out almost immediately to leave more room for repetitive bickering, and is then replaced by something else. Late in the film, the tone very abruptly switches to tragedy, these morons start to behave like adult human beings, and it appears that they've found their true spiritual awakening after all. Then we're back to the failed wackiness and they forget all about it, experiencing at least three more "spiritual awakenings", each more trite than the last. Towards the end I kept looking at the timer because whenever the movie seemed to be over, something else would start happening, and there were eventually about five "endings". There are also two beginnings, literally, since you can watch it with or without a 12-minute "Part 1" that has very little to do with the rest of it.

As a travelogue it would work just fine if The Three Stooges didn't keep getting in the way of the scenery, and it's a master-class in how to overdecorate a train. But as a movie, it's the cinematic equivalent of that unfortunate ailment which foreigners visiting India often come down with. It usually affects the lower intestine, but in Wes Anderson's case, it seems to have gone to his head.

When I ordered this film I thought from the blurb that it would be fun...on the lines of The Hangover, but we were disappointed. The direction was vague and loose, so that you couldn't engage with the characters. The humour was not very amusing and it was interspersed with definitely not humorous incidents which weren't treated with the seriousness they deserved. The film seemed to have no goals or resolution.

All in all, boring and pointless.

That was the length of the film. 87 minutes of my life I will never get back. It is well in the running for the worst film I have ever seen! Imperceptible plot. Never laughed once. Cheered when the credits rolled!

This movie feels like the perfect dessert for someone on a diet. It has volume and colour , it looks really interesting and from a distance suggests it is really going to be fantastic but then you spoil the illusion by taking up a spoonful and realise that it is actually nothing but air whipped up with a bit of colouring and nothing else at all. Resulting in something completely calorie free.

And what in earth was Bill Murray even doing in this movie ? I'm wondering if he won a bet during some earlier movie where the forfeit was that he got to appear in the next Wes Anderson movie whether or not there is a part for him. I honestly can't think of any other reason for his appearance.

The whole thing feels like a collosal waste of time , effort and talent.