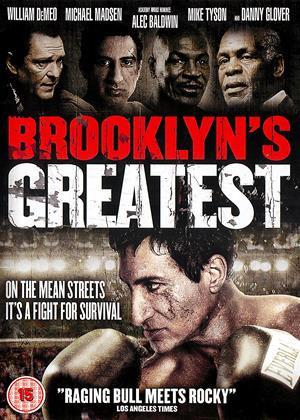 Synopsis:
Set in the late 80s, 'Brooklyn's Greatest' is a gritty tale about Anthony Rodriguez (William DeMeo), a half Italian, half Puerto Rican young man growing up on the streets of Brooklyn. Anthony had to endure an abusive, alcoholic father but was blessed with a hard-working and nurturing mother who he lost at a very young age. Anthony manages not only to go pro, but fights his way to becoming a World Champion middleweight boxer. His success, however, comes at a cost, loss of love, the pain of humiliation and the fear of retaliation and revenge all play a role in his rise to the top.
Actors:
Alec Baldwin, Shannen Doherty, Michael Madsen, Danny Glover, Annabella Sciorra, Manny Perez, Lillo Brancato, Mike Tyson, Louis Lombardi, Joseph D'Onofrio, William DeMeo, Brooke Allison, Patricia Stark, Paul Borghese, Jimmy Palumbo, Ronnie Marmo, Peter Gaudio, Rocco Parente, Emmanuel Brown, Margo Kazaryan
Directors:
Paul Borghese
Producers:
William DeMeo
Writers:
William DeMeo
Aka:
Back in the Day / Knockout
Studio:
101 Films
Genres:
Drama, Sports & Sport Films

Imagine Rocky, The Goodfellas, Casino, and maybe Road to Perdition, but without the emotional poignancy – and you’ve birther yourself a Brooklyn's Greatest. The film follows a young man as he wanders through the Brooklyn streets where the ways of the mob are law. In actuality, under the street law hide layers of chaos, authoritarianism, crowd mentality, and few of the other things that make the mafia life not so inviting, if at all. But, young Anthony (played by William DeMeo, who is also the main screenwriter) is left on his own merit to make a living in the world. And this would be Brooklyn's Greatest in a nutshell.

However, there’s more to the film than just that. The character of Anthony is portrayed as a troublesome young man who wants to prove to the world that he’s more than just muscle and bone. That he’s a sharp mind as well. And so, as the gangsters embrace this young fellow into their ranks, the audience also sees the dualistic nature of their characters: as not everything is black and white and morality (according to the film at least) is more so extended across a grey backdrop. These virtues that Anthony possesses are recognized by the mobsters, so they are reluctant to interfere with his inner compass of rights and wrongs. Instead, the characters of Gino Fratelli (Alec Baldwin), Enzo (Michael Madsen), and an interesting cameo by the champ Mike Tyson himself, urge Anthony to follows his own path and slice through his destiny like a hot knife through butter. At first, he’s reluctant and hesitates to side with neither side of the mobsters. Then, we see his character growth both through his mental and physical fights, and so we grow fond of him as well.

Moreover, Brooklyn's Greatest features a little bit of everything: scorns, friendships, betrayals; unfortunately, this is where the film grinds to a halt. Namely, since Anthony is the strongest link of Brooklyn's Greatest – it’s only naturally for him to hold the whole movie together like glue. And for the scenes that he’s not in, well… let’s say they’re satisfactory at most. Nothing out of the ordinary here, so moving on.

In regards to the dialog, one cannot emphasize enough that it could’ve been better. Whether or not this had something to do with deadlines, or perhaps it was a budget issue, it seems as if Brooklyn's Greatest just can’t really connect to the audience through its below-average dialog. Thankfully, the star of the day William DeMeo manages to nullify this particular issue by offering a strong physical presence on film, which sometimes is everything you’d need from a lead.

Finally, if you’re keen on watching gangsters turn boxers and vice versa, then Brooklyn's Greatest might just be the perfect feature for your tastes.